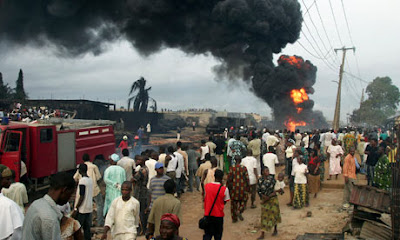 The rise in daily crude oil production, which has been steady for some time, was halted yesterday, following orchestrated attacks in Uyo, Akwa- Ibom State and Nembe in Bayelsa, by armed gangs.

The attacks led to hostage-taking in Uyo and the blowing up of an oil pipeline in Nembe, where tension is now high, though no casualty records are available.

The attacks took place within 48 hours of each other, affecting Agip and Mobil oil companies, but no group has come up to claim responsibility in either case. The attacks came amidst Nigeria 51st independence anniversary celebrations and after threats from both the Movement for the Emancipation of the Niger Delta (MEND) and Boko Haram, to disrupt the celebrations at Eagles Square , Abuja , with bombs. The events also came a few days after some disenchanted former members of local militia groups protested that they had not been incorporated into government’s amnesty programme, and threatened to return to the creeks to disrupt the operations of oil companies.

Mobil operates the 960,000-barrels-per-day crude export terminal, off the Ibeno shoreline in Akwa Ibom state, and extracts crude from over 90 platforms within Nigeria ’s territorial waters, in a joint venture with the Nigerian National Petroleum Corporation (NNPC).

In the new attacks, unknown armed men invaded the Okoroma-Tereke area of Nembe Local Government Area of Bayelsa State, where the trunk line is located, and blew it up in the early hours of Monday, a local source disclosed.

The source said a loud explosion was heard in the surrounding villages and an inferno immediately occurred, further threatening the fragile environment in the mangrove swamp, but it is still not known which group carried out the attack.

However, NAOC says it does not plan to introduce any force majeure on its oil export after the small incident at the pipeline, which is part of Obama-Brass line, Its spokesman said.

“It is a very small incident. No force majeure is expected. Works to repair the damage will be completed in the next few hours,” the spokesman said.

The ex-militants argued that they had submitted their arms and were assured that they would soon be integrated into the amnesty programme, but that recent efforts to get them fully integrated failed, so they barricaded the road in protest.

In Uyo, unknown gangsters had earlier (Friday, September 30, 2011) attacked a supply vessel belonging to ExxonMobil, off the Akwa-Ibom state coastline, kidnapping a worker aboard and seriously injuring another.

Sources said the gunmen, who had boarded the ExxonMobil oil platform off Akwa- Ibom coastline and suddenly struck, were yet to establish communication with the oil company or relatives of their abducted victim.

Confirming the incident in a statement, the management of Mobil Producing Nigeria said: “Mobil Producing Nigeria (MPN), operator of the joint venture with the Nigerian National Petroleum Corporation (NNPC), confirms that in the early hours of Friday, some armed men attacked a supply vessel near one of our platforms, offshore Akwa Ibom State “. The statement was signed by Gloria Essien Danner, an executive director, social and governmental affairs.

The spokesman of the Joint Military Taskforce (JTF), Timothy Antigha, confirmed the attack in Nembe,Bayelsa, saying the JTF had reached out to its men in the area to ascertain the cause of the explosion at the trunk line.

Presidential Adviser on Niger Delta Matters, Kingsley Kuku was in Bayelsa State when the attacks came, and has urged the governor to treat any protests as criminal acts.

He said the amnesty programme ended on October 4, 2009, and that crude production might hit 3.5 mbpd with Nembe Creek facility on stream. Governor Timipre Sylva is however asking the angry militants to wait for another possible amnesty window.
Posted by Crude Oil Daily at 8:54 AM