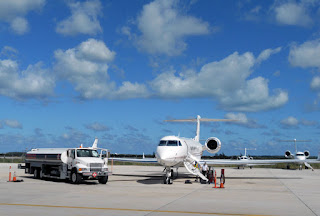 An investigation has begun into what caused a Dana Air jet to crash in Lagos, Nigeria.

The incident killed all 153 people on board and a currently unidentified number of people on the ground.

The two potential causes currently being investigated are a bird strike and a lack of fuel.

According to the Aviation Safety Network, the same aircraft was forced to make an emergency landing on 19 April 2010 after a number of birds were ingested as it departed from Lagos Airport.

The other theory is that the aircraft ran out of fuel. If this were the case, both engines would have failed, leaving the pilot with no other option but to land somewhere in the highly built-up area.

Three crewmembers, one of which was responsible for fuel management, were working in the airplane's cockpit at the time of the incident.

A report outlining the findings of the incident will not be released for a number of months.
Posted by Crude Oil Daily at 9:41 AM