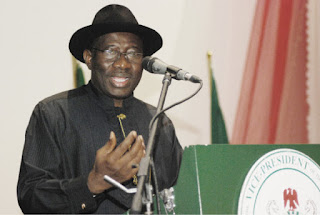 President Goodluck Jonathan yesterday described Nigeria as the only country in the world where crude oil is stolen at an alarming rate, saying the situation has reached the stage of a full-blown cancer.

He also said he has not decided whether to run for the presidency in 2015, as he needed more time to attend to security and economic matters plaguing the country before thinking of 2015 politics.

While responding to questions at a "Presidential Media Chat" televised live last night, Jonathan said while the issue of whether he will seek a second term in 2015 was overheating the country's political environment, "it is not proper for a Nigerian president to make comments on 2015 at this stage".

Hinting that he would make his decision public by the end of 2013, the president urged Nigerians to allow him to use two years-plus to tackle economic and security issues. He cited a country like Ghana where, he said, things are haphazard because, right from day one after their general elections, campaigns begin in top gear for the next one.

"Let us leave 2015 issue. When INEC opens the gate we will know who is to contest and who will not contest," he said, adding that he should not be dragged into making statements that the media could begin to mis-interpret the next day.
Expressing worry over crude oil theft in Nigeria, Jonathan said: "The stealing of crude oil appears to be in Nigeria. It is not happening elsewhere. It is like a cancerous cell. A cancerous cell starts developing somewhere in your body, either in your prostate region or in your breast and they won't notice it still; or probably when they notice it, they think that it is ordinary boil. It gets to a point where, when they know, they cannot control it.

"We have held serious meetings between security services, the private sector like Shell and all the key oil players. We have been holding meetings. They will have to stop it. But it is like allowing a cancerous cell to develop a major tumour that even spreads to the critical organs. So, we need stronger effort. We need to spend more money than to spend more days in the hospital. That is where we are. We will crush it; we are on it. Because there is no county where they are stealing crude oil the way they are stealing in Nigeria."

Noting that classifying the stealing of crude oil as oil bunkering was not proper, the president said, "the word bunkering I knew when I was in the customs in Port Harcourt, happens in a way that when ships come, there are big companies that are legalised to go and sell them in water. But, here, somebody goes there to open a pipe and steal crude oil and they call it bunkering. I don't know whether, technically, it's bunkering. I call it crude oil stealing. It is not bunkering. Those who still crude oil are thieves. They are common criminals."

The president, however, disagreed that Nigeria is broke, even as he said the country boasts about N34 billion in its foreign reserves. "If we are broke, nobody will come and invest here. The Chinese will run away, the Indians will run away," he stated.

Why I sacked Azazi, Bello

Jonathan also opened up on why he removed his former national security adviser, General Andrew Azazi, and erstwhile defence minister, Dr Halliru Bello, saying the changes became necessary to meet up the standard of security operations in the war against terrorism in the country.

Although he noted that Azazi's removal was not as a result of incompetence, the president implicitly hinted of the former NSA's failure when he pointed out that he would continue to "make changes in the security apparatus to make it more responsive to the exigencies of the moment".

According to him, the removal of Azazi as NSA was part of such changes and adjustment to meet the standard in security operations in the country.

On his official visit to Brazil when the country was on fire following the reprisal attacks that trailed the bombings of churches in Kaduna and Zaria, killing over 70 people and injuring about 100 persons, President Jonathan stated vehemently that he did not regret attending the UN Earth Summit in Brazil, saying he will not allow terrorists to stop him from functioning as a president.

According to him, the aim of terrorists anywhere in the world is to disrupt the government and stop the president from functioning.

He said, "If I had panicked and was stopped from travelling to Brazil last week, the terrorists would have achieved their main objective and a wrong signal would have been sent out to the international community that even the president is being held hostage. The day the international community gets to know that the president of Nigeria is tied down because of Boko Hram, then, we are finished.

"When I was in Brazil, I got a lot of calls from Nigerians expressing worries that the country was burning and I went out of the country. People who got worried that I travelled got worried out of ignorance. The day the international community knows that the president, the vice president or Senate president cannot travel because of Boko Haram, then, we are finished. Boko Haram cannot bring this country to its knees."

Noting that he will not let terrorism weigh his government's activities and programmes, he noted, however, that he would be ready to engage in dialogue with members of the terrorist group if they show their faces, adding that since they are Nigerians, he would not want any of them to die.

We're ready for dialogue with sect

Expressing his readiness to engage members of the Boko Haram sect in constructive dialogue and, if possible, send them for training anywhere in the world so that they would contribute to the development of the country, the president promised to continue to encourage people like Dr. Datti Ahmed to facilitate dialogue with the terrorists.
He refused to say why he promised that terrorism would be brought to an end by June that saw Boko Haram activities reaching top gear in the country. He maintained emphatically that the menace would soon come to an end.

I have confidence in Lamorde

On corruption, Jonathan said his choice of Ibrahim Lamorde as EFCC chairman was informed by the fact that he will be able to deliver and not somebody he could control. "Lamorde investigated me when I was governor of Bayelsa State. So, if I need somebody I should control, I wouldn't have chosen Lamorde. I have confidence in Lamorde."

On why he has not declared his assets, Jonathan said it is a matter of principle. He wondered why so many people bring issues and begin to play politics on them when it is not the president declaring assets that stops Boko Haram.
He said there is no difference between when he declared his asset as vice president now that he is president, adding that, even as vice president, he had acquired what he needed to acquire.

He said if he had something to hide in the ongoing subsidy probe, he wouldn't have brought Nuhu Ribadu, former EFCC chairman and presidential candidate of the Action Congress of Nigeria, to chair a task force, just as he disclosed that he had ordered the EFCC to go and investigate some bank accounts in US.

I won't witchhunt anybody over subsidy probe

Denying that he was not and is not part of any witch-hunt of suspended chairman of the House committee on subsidy probe, Farouk Lawan, Jonathan said if he had any plan to go after Lawan, he would not have used oil magnate Femi Otedola who is a businessman.

Explaining his closeness to Otedola, the president said most business men like Aliko Dangote had been members of the Economic Management Team right from the regime of former president Olusegun Obasanjo and they are not being paid, but they are always around the presidential villa for economic meetings.

He also said that he enjoys a good relationship with the National Assembly against insinuations that a cold war was brewing between the executive and the legislative arms of government.

He, however, added that it "is not as if there are no issues" between the executive and the legislature.
Reacting subtly to the recent invitation by the House of Representatives that he and his security chiefs should appear before it, Jonathan said, "There are some issues. It is in the National Assembly that the opposition show their relevance. They cannot come to ministry of education. If you invite the minister of agric to come 1,000 times to explain himself, it cannot stop him from doing his work."

Noting that people leave the substance to pursue the shadow whenever they criticise him, Jonathan said he is a calm person who is being misunderstand by a lot of people. "I am such a person that even you are telling me rubbish, I will sit down, calm and listen to you even if I know you are talking rubbish," he said.

Asked whether Nigerians should still trust him, Jonathan answered in the affirmative, just as he ruled out criticisms on social media against his government, saying most of he criticisms against him on social network always come from one source.

He said, "One person can replicate a message many times and people begin to think that the whole country hates you. I told people working with me that they should close their ears because people will abuse you, but by the time we get to 2013, people will begin to appreciate what you are doing".

Likening Nigeria to a forest, the president said he had given himself 12 months for Nigerians to abuse him. "They have not even been abusing me much, but by the time you begin to see the outcome of what we are doing, they will begin to appreciate," he stated.
Posted by Crude Oil Daily at 10:36 AM