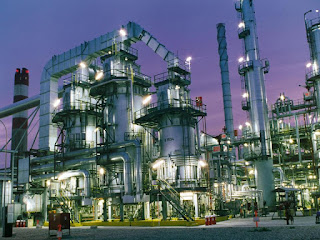 PORT ARTHUR, Texas -- Motiva Enterprises on Thursday unveiled its completed $10 billion expansion of what is now the largest U.S. refinery, and one of the world's top 10, planned six years ago to serve what once seemed to be a growing appetite in the planet's hungriest fuel market.However, a major financial crisis and increased efficiency have pushed US fuel demand to 11-year lows, and experts say that the gasoline and diesel coming out of the facility will instead help strengthen the country's new role as a fuel exporter.Motiva, a joint venture between Royal Dutch Shell and state-owned oil behemoth Saudi Arabian Oil Co., or Saudi Aramco, still thinks US fuel demand is strong enough to handle the refinery's output of 600,000 barrels a day and make it a profitable facility. "But clearly exports are part of that thinking," Shell's Chief Executive Peter Voser said at the opening ceremony. Markets include Latin America's booming economies, or emerging, far-off destinations such as West Africa.The Motiva expansion, which accounts for 325,000 barrels of the refinery's daily capacity, is not only about processing more crude; it allows the refinery to process a wider variety of crude types, from Canadian heavy oil crude to Saudi sour. Such adaptability will make it one of the world's most efficient refineries, executives said.However, it will still meet the same profitability challenges that have dogged most US refiners since the financial crisis emerged. Fuel demand has fallen precipitously amid increased vehicle fuel efficiency, growing use of biofuels, and a tepid economic recovery. BP, Sunoco and others are trying to sell refineries amid a dim outlook on the business.Analysts said that the boost in supplies from Motiva could cause gasoline prices to sink slightly. Running the facility at the industry average of 90 percent of capacity would produce more fuel than the US market needs.Motiva's potential as an exporter underscores the US's new role as a net fuel exporter. Even though the US still imports a significant portion of its crude oil, last year it became a net fuel exporter for the first time since the end of World War II, thanks to the combination of tepid domestic demand, bad refining economics in Europe, and Latin American growth.The US exported a net 840,000 barrels of fuel a day during the first three weeks of May after being a net importer for much of last year, according to the latest data from the U.S. Energy Information Administration.

Read more: http://www.myfoxdfw.com/story/18670293/largest-us-oil-refinery-unveiled-amid-stagnating-demand-tepid-economy#ixzz1yofpiYIp
Posted by Crude Oil Daily at 10:44 AM