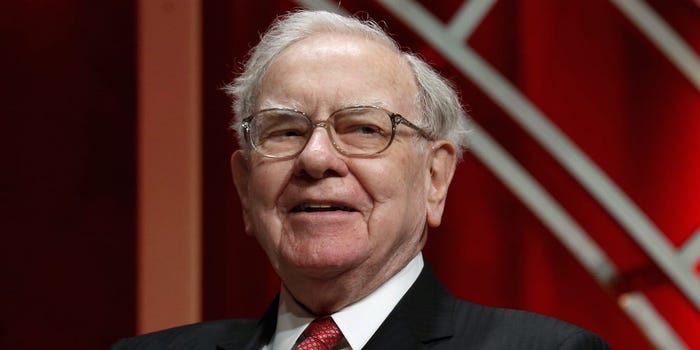 Get the inside scoop on what traders are talking about — delivered daily to your inbox.

The famed investor amassed the nearly 10% stake in the energy group last week after scouring a transcript of its fourth-quarter earnings call, held on February 25.

"I read every word and said, 'This is exactly what I would be doing,'" he told CNBC. "She's running the company the right way," he continued, referring to Vicki Hollub, the Occidental CEO.

"We started buying on Monday, and we bought all we could," Buffett said.

Berkshire purchased 29.8 million shares by Tuesday's close, then scooped up another 61.4 million shares over the next three days, based on Buffett's comments and Securities and Exchange Commission filings.

Buffett called Hollub to inform her of the purchases just one minute after the market closed on Friday, he told CNBC.

Berkshire has doubled down on Occidental with its latest bet. It already holds $10 billion worth of preferred shares in the oil and gas company, along with warrants to buy 83.9 million common shares at an exercise price of $59.62. If Occidental stock rises above that level, Berkshire can exercise its warrants and sell the resulting shares for a profit.

Buffett and his team received the preferred stock and warrants in exchange for providing Occidental with $10 billion to help finance its takeover of Anadarko Petroleum in 2019. Berkshire collects about $800 million a year from the arrangement, thanks to the 8% annual dividend on the preferred shares.

Carl Icahn, the billionaire investor who sold his last chunk of Occidental stock last week, slammed Hollub's deal with Buffett in 2019. The Berkshire chief "took her to the cleaners," and the negotiation was like "taking candy from a baby," Icahn said at the time.

James Shanahan, a senior equity analyst at Edward Jones, highlighted in a research note that Occidental now ranks among the larger holdings in Berkshire's $300 billion stock portfolio, just behind its $6 billion stake in Chevron.

He also noted that Buffett, who is itching to deploy $80 billion but has been priced out of stocks and acquisitions for several years now, might have some big purchases on the horizon.

"We are becoming more optimistic about cash deployment, and believe that there are at least two sizable investments possible in the next year or so," Shanahan wrote. He suggested Berkshire could buy the late Walter Scott's 8.9% stake in Berkshire Hathaway Energy and boost its stake in Pilot to 80% early next year.

Read more: BlackRock's global chief strategist reveals why the world's biggest investment firm has changed its outlook on US stocks — and lays out the biggest risks for investors right now