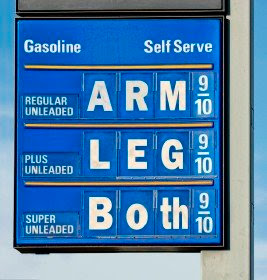 The proposal probably won't go too far, though, given the current attitude in Congress toward providing more stimulus money.

The odds are good that if you've recently stuck your head outside your front door, you've heard someone complaining loudly about how high gas prices have gotten. In some places where gas prices are usually higher already, like Los Angeles, we've seen figures topping $6 per gallon, which can be a tough pill to swallow, especially if your life forces you to drive a lot.

According to a report published on Monday by Business Insider, though, the feds are trying to put together a stimulus rebate program to help. If passed, it would see $100 stimulus payments (plus an additional $100 per dependent) made monthly as long as the average gas price is above $4 per gallon.

The program would have an income cap, which isn't surprising. Folks filing as single on their taxes would be eligible as long as they make less than $80,000 per year, while joint filers could make up to $160,000 before the rebate was phased out for them.

The proposal, known as the Gas Rebate Act of 2022, was introduced by congressional Reps. Mike Thompson (D-California), John Larson (D-Connecticut) and Lauren Underwood (D-Illinois). Unfortunately, their proposal seems to be a little light on detail, particularly when it comes to how Congress would fund this stimulus. This, combined with Congress' lack of interest in funding further rounds of stimulus payments in general, mean that the proposal is unlikely to find much support in government.

The national average gas price at the time of publication, according to AAA, sits at $4.24, and we suspect that it's not going to be heading down anytime soon.