T. Boone Pickens has a federal subsidy beef with the Koch brothers over natural gas, ethanol 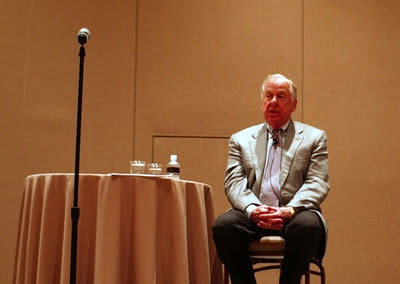 Since the summer, natural gas supporter T. Boone Pickens (pictured) has been in an energy fight with the Koch brothers. Think of it as a battle of the conservative billionaires to see who can get more money from the federal government.

According to the Des Moines Register, Pickens has been working to encourage governmental support for natural gas vehicles. No surprise there, since Pickens believes it was given to us by God himself. The Koch brothers, on the other hand, have their hands out for a lot of ethanol subsidies even though they are often called Libertarian (or at the very least, deeply conservative). Pickens reportedly said recently that:

Koch Industries imports 61,000 barrels of OPEC oil a day to their Corpus Christi refinery. They're the third largest recipient of subsidies for ethanol, they're in the chemical business and the fertilizer business. So everything I do could affect them in some way. They're against me. I know Charles and David Koch. I asked them to talk to me about this subject; they would not do it. They would not return my phone calls. When I was one of their biggest customers in 2005, I heard from them and was entertained in their home in Wichita, but now (they) don't want to talk to me about it. They've gone and tried to peel off all the co-sponsors of the bill that they can. While they knocked out 14 I was getting 16. They spend a lot of money to do this. They're working for the Kochs, I'm working for America. I want an energy plan for America, they want an energy plan for the Koch's.
This past May, Charles Koch wrote an op-ed that claimed that Picken's call for natural gas to get subsidies "well-intentioned but misguided" even as it said that Kock didn't even want the ethanol subsidies he was collecting: "Because ethanol use is mandated, we were compelled to be in that business. We still oppose ethanol subsidies and mandates even though some of our businesses would benefit from them." A spokesman for the Koch brothers wrote to Congress in June that "We do not believe government should be picking 'winners and losers' in the marketplace." Well, of course you don't. Not once you're already winning.