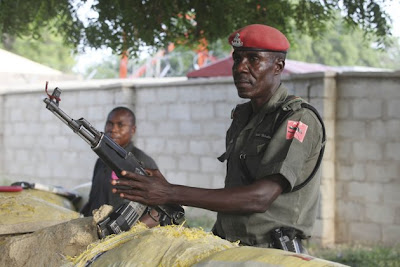 In this Wednesday, Sept. 28, 2011 photo, police officers armed with AK-47 rifles stand guard at sandbagged bunkers along a major road in Maiduguri, Nigeria. The radical sect Boko Haram, which in August 2011 bombed the United Nations headquarters in Nigeria, is the gravest security threat to Africa's most populous nation and is gaining prominence. A security agency crackdown, which human rights activists say has left innocent civilians dead, could be winning the insurgency even more supporters. (AP Photo/Sunday Alamba)
http://news.yahoo.com/officials-67-dead-northeast-nigeria-attacks-132851011.html
By JON GAMBRELL and NJADVARA MUSA - Associated Press | AP – 43 mins ago..

LAGOS, Nigeria (AP) — At least 67 people died in a wave of bombings and shootings carried out in northeast Nigeria overnight, officials said Saturday, as frightened mourners left their homes to begin burying their dead.

A radical Muslim sect known locally as Boko Haram claimed responsibility Saturday for the attacks, which represent the most coordinated and wide-ranging assault yet in their increasingly bloody sectarian fight with Nigeria's weak central government. The sect, which wants the strict implementation of Shariah law across the nation of more than 160 million people, promised to carry out more attacks.

The fighting centered around Damaturu, the capital of Yobe state, Nigerian Red Cross official Ibrahim Bulama said. The attack started Friday with a car bomb exploding outside a three-story building used as a military office and barracks in the city, with many uniformed security agents dying in the blast, Bulama said.

Gunmen then went through the town, blowing up a First Bank PLC branch and attacking at least three police stations and some churches, leaving them in rubble, he said. Gunfire continued through the night and gunmen raided the village of Potiskum near the capital as well, witnesses said, leaving at least two people dead there.

On Saturday morning, people began hesitantly leaving their homes, seeing the destruction left behind, including military and police vehicles burned by the gunmen, with the burned corpses of the drivers who died in their seats.

Bulama spoke to The Associated Press by telephone Saturday morning from a common Muslim burial ground in the city as his family buried a relative and friend, a police officer who died after suffering a gunshot wound to the head in the fighting.

"There's that fear that something might possibly happen again," he said.

State government officials did not respond to repeated requests for comment Saturday.

The attacks around Damaturu came after four separate bombings struck Maiduguri, about 80 miles (130 kilometers) east. One blast detonated around noon outside the El-Kanemi Theological College where parents had gathered. Police said others had entered the college grounds to attend Friday prayers at a mosque located on its campus.

Witnesses who spoke to the AP said they saw ambulances carry away at least six wounded people from the site. Another bombing alongside a road in Maiduguri killed four people, local police commissioner Simeon Midenda said.

A short time later, suicide bombers driving a black SUV attempted to enter a base for the military unit charged with protecting the city from Boko Haram fighters, military spokesman Lt. Col. Hassan Ifijeh Mohammed said. The SUV couldn't enter the gate and the explosives were detonated outside of the base, which damaged several buildings in the military's compound, Mohammed said.

Mohammed said blasts occurred at three other places in Maiduguri besides the base, with no one being killed. However, government officials routinely downplay such attacks in Nigeria over political considerations.

"We will continue attacking federal government formations until security forces stop their excesses on our members and vulnerable civilians," the spokesman said.

His comments come as human rights activists say soldiers have beaten and killed civilians while trying to search for the sect in Maiduguri.

Boko Haram's attacks occurred ahead of Eid al-Adha, or the feast of sacrifice, when Muslims around the world slaughter sheep and cattle in remembrance of Abraham's near-sacrifice of his son. Police elsewhere in the country had warned of violence ahead of the celebration in Nigeria, a country largely split between a Christian south and a Muslim north. On Wednesday, police in Maiduguri had said they broke up a plot to bomb the city over the holiday.

Boko Haram apparently has split into three factions, increasing the danger for Nigeria, the AP has learned. One faction remains moderate and welcomes an end to the violence, another wants a peace agreement with rewards similar to those offered to a different militant group in 2009.

The third faction, though, refuses to negotiate and remains the most radical. This faction is in contact with al-Qaida's North Africa branch and likely the Somalia-based terror group al-Shabab, a diplomat said on condition of anonymity according to embassy orders.

That sect likely is responsible for the increasingly violent and sophisticated attacks carried out in the sect's name. In August, Boko Haram claimed responsibility for a suicide car bombing at the United Nations headquarters in Nigeria's capital, which killed 24 people and left another 116 wounded.

Jon Gambrell can be reached at www.twitter.com/jongambrellAP.
Posted by Crude Oil Daily at 1:22 PM