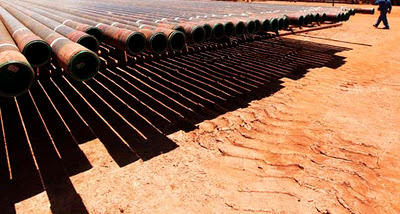 YOUNGSTOWN, Ohio (AP) — A rare sight in hard-luck Youngstown, a new industrial plant, has generated hope that a surge in oil and natural gas drilling across a multistate region might jump-start a revival in Rust Belt manufacturing.

The $650 million V&M Star mill, located along a desolate stretch that once was a showcase for American industry, is to open by year's end and produce seamless steel pipes for tapping shale formations.

It will mean 350 new jobs in Youngstown, a northeast Ohio city that is struggling with 11 percent unemployment.

Vast stores of natural gas in the Marcellus and Utica shale formations have set off a rush to grab leases and secure permits to drill. Industry estimates show the Marcellus boom could offer robust job numbers for 50 years.

Similar hopes are alive in Lorain, Ohio, where U.S. Steel will add 100 jobs with a $100 million upgrade of a plant that makes seamless pipe for the construction, oil-gas exploration and production industries. Erin DiPietro, a company spokeswoman in Pittsburgh, said the expansion will make the Lorain operation more competitive and help it tap into expanding shale developments.

The mayors of both Ohio cities see a chance to revive manufacturing through shale drilling.

"For every manufacturing job there are between five and seven ancillary jobs created within the community that support those manufacturing jobs," said Lorain Mayor Tony Krasienko. His city has a 10.6 percent unemployment rate.

Companies are trying to spin off more work from shale development, and every bit will be a plus, according to Youngstown Mayor Charles Sammarone. "I just know this: the money they will spend will help the economy," he said.

Those benefiting from shale development include American Railcar Industries of St. Charles, Mo., with an order backlog that is the largest since 2008. The company, with operations across the U.S, was helped by demand for freight cars used in the shale industry.

One of the biggest manufacturing projects on the shale developing horizon is the plan for a multibillion-dollar Shell Oil Co. petrochemical refinery. Pennsylvania, Ohio and West Virginia are competing for the plant, which would convert natural gas liquids to other chemicals that go into everything from plastics to tires to antifreeze.

"What they're talking about at this stage is, you're looking at the next gold rush," said Martin Abraham, science-engineering dean at Youngstown State University.

One study backed by the oil and gas industry predicted developing oil and gas reserves could create or support more than 200,000 jobs in the next four years just in Ohio, where Hess Corp. recently made a series of mineral-rights purchases worth $750 million.

But the project is not without controversy.

Susan Helper, a Case Western Reserve University professor who studies manufacturing issues, said such job projections are suspect, in part because the estimate of natural gas reserves may be inflated.

She said the industry and politicians have a self-interest in rosy projections. "It's a way of saying to environmentalists and others that say slow down, 'Gee, you're preventing all this potential great job growth here'," she said.

V&M Star, with production locations in Youngstown, Houston and Muskogee, Okla., will ramp up production over the next year, creating seamless pipe to bring gas or oil to the surface.

"Not only do we have an experienced workforce but ... our market is in our backyard," said Joel Mastervich, the company's president and chief operating officer.

Rick Mazza, 52, who has experienced the industrial decline firsthand, likes the initial boost that V&M Star has generated for his commercial-residential heating and cooling business. He's hired two more workers in the past year.

"It's going to be a good spillover for us, especially with this depression or recession, whatever we're in now," said Mazza, who was laid off repeatedly in the 1980s at the General Motors Corp. plant in nearby Lordstown.

The Youngstown-Warren region has lost more than 28,000 jobs in the past 10 years, two-thirds of them in manufacturing. The Youngstown population has declined to about 67,000, less than half of what it was some 40 years ago, and the city is aggressively bulldozing dilapidated houses to reconfigure itself as a smaller city.

The city has a center that nurtures small-business development and has worked to upgrade the neighborhood around Youngstown State University, an important job source with more than 2,000 employees.

Despite the efforts, there was renewed evidence of the city's decline in a Nov. 3 Brookings Institution report that said Youngstown has the nation's highest concentration of poverty among the 100 biggest metro areas.

Boosters in the region cite additional evidence of an improving manufacturing climate, including a mechanical engineering firm that expanded from Michigan to Youngstown and the hot-selling Chevrolet Cruze built in Lordstown.

In August, the U.S. Geological Survey said the Marcellus Shale region from New York to Ohio contains some 84 trillion cubic feet of undiscovered, recoverable natural gas, far more than thought nearly a decade ago. Some geologists have put the figure even higher, but those estimates are controversial .

Permits allowing hydraulic fracturing in Ohio's portion of the Marcellus and the deeper Utica Shale have risen from one in 2006, to four in 2009, to at least 32 this year, state records show. Pennsylvania has nearly 3,500 Marcellus wells sunk, most since 2008, and more than 500 permits have been issued this year in West Virginia.

Environmentalists are critical of the process, which utilizes chemical-laced water and sand to blast deep into the ground and free the shale gas. Critics fear the process itself or the drilling liquid, which can contain carcinogens, could contaminate water supplies, either below ground, by spills, or in disposed wastewater.

Mark Brownstein, an attorney with the Environmental Defense Fund, said it's up to regulators and drillers to make sure shale industry jobs are created while protecting the environment.

At a family-owned tavern in Youngstown managed by Larry Maffitt, the talk is focused on a brighter jobs future.

Steel workers coming off shifts around the clock had the place packed three deep years ago, but there were just 10 people on a recent day.

With the new plant across the road, the community's morale "is all positive," said Maffitt, 59. "Every day we've got something to look forward to."