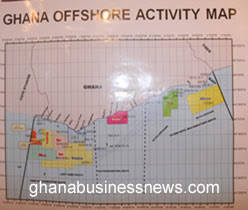 The government of Ivory Coast led by President Allasane Ouattara has mapped out a new maritime border it is sharing with Ghana covering some of Ghana’s jubilee oilfields.

The country has therefore publicly challenged Ghana over title to the offshore acreage hosting some of the region’s most prolific oil and gas fields. It is believed that the disputed border hold about a billion-barrel discoveries.

Upstream news publication reports that officials at state oil company, Petroci, early November 2011 unveiled a controversial map redrawing the maritime border between the two nations, which has been in long-running talks over the disputed area.

“This scenario effectively sees the Ivory Coast as laying claim to much of Tullow Oil’s Jubilee, Tweneboa, Enyenra and Owo discoveries, among others, plus the West Tano-1X find and several prospects,” the publication cited an unamed source as saying.

According to Upstream, a source at Ghana’s energy sector said he “deplored the escalation” of the dispute adding “Ghana understood that the joint boundary commission is in place and should continue meeting to reach agreement on the bilateral dispute.”

Even though talks between Ghana and Ivory Coast has not been concluded, the publication says Ivory Coast now plans to develop its own gas processing infrastructure, ostensibly duplicating proposals advanced by Ghana, although most believe this move is simply political posturing ahead of a diplomatic solution to the maritime border impasse.

Head of the technical committee of the Presidential Commission, Mr. Lawrence Apaalse told ghanabusinessnews.com on the phone Sunday June 26, 2010 that the Ivorians made some proposals to the Ghanaian Commission, but the proposals were not acceptable and they were asked to go back and review it.

“We were waiting to hear from them, and then they had the political situation in that country. We have not heard from them since that time,” he said.

Although there seems to be a looming diplomatic uproar, Ghanaian officials have painted a picture that the situation is under control and there is no cause for alarm.

Ghana’s Energy Minister Dr Joe Oteng Adjei at a press conference in Accra early October 2011 indicated that Ghanaians should not be worried about the border dispute. He made the comment the day President Ouattara paid a day visit to Ghana after assuming power.

It was believed that Outtara’s visit to Ghana was on two main issues – first was to get ex-President Laurent Gbagbo’s men hiding in Ghana to be arrested and second was how to solve the border dispute.

Meanwhile, the Jubilee Partners have already raised concerns about the boundary problem.

Texas-based oil explorer, Kosmos Energy has expressed fears about the development. The oil producer says the future of a portion of its license in the Deepwater Tano Block is uncertain as the issue remains unresolved.

Kosmos fears that if changes are made to the maritime boundary demarcation between Ghana and Ivory Coast, it may lose some of its license. It has 18% stake in the Deepwater Tano block in the Gulf of Guinea.

The Dzata-1 well and the Deepwater Tano fall within the same boundary.

Currently Ghana is the rightful owner of the area, but Ivory Coast has petitioned the United Nations to demarcate the Ivorian territorial maritime boundary with Ghana. Even though the two countries met in April 2010 for negotiations on the matter, Kosmos says the results of the meeting were not announced and the issue remains unresolved at present.

“Uncertainty remains with regard to the outcome of the boundary demarcation between Ghana and Côte d’Ivoire and we do not know if the maritime boundary will change, therefore affecting our rights to explore and develop our discoveries or prospects within such areas”, the Warburg Pincus and Blackstone Group (BX) backed company said in a filing form to the US Securities and Exchange Commission on April 25, 2011.

By Emmanuel K. Dogbevi & Ekow Quandzie
Posted by Crude Oil Daily at 11:13 AM