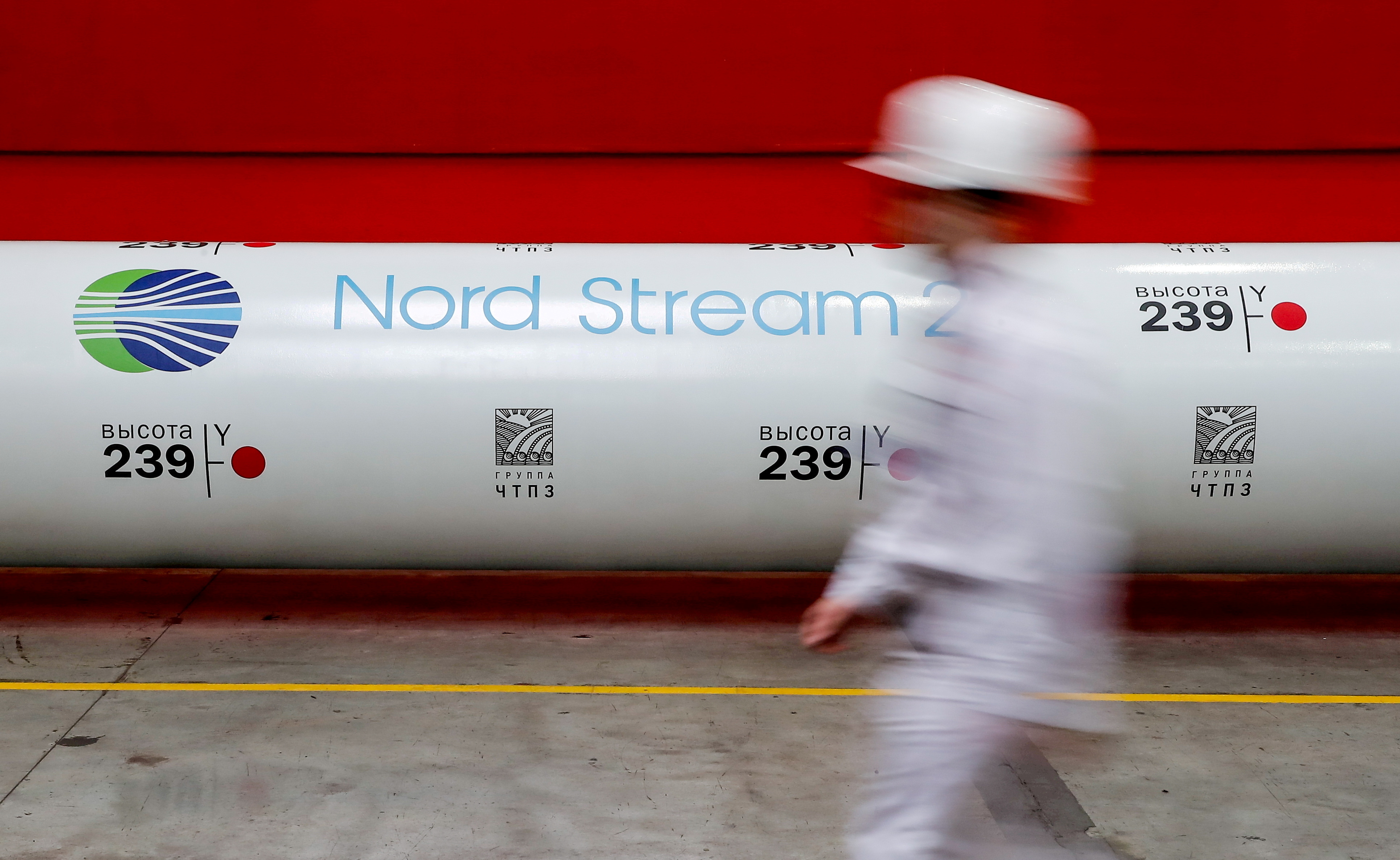 The logo of the Nord Stream 2 gas pipeline project is seen on a pipe at the Chelyabinsk pipe rolling plant in Chelyabinsk, Russia, February 26, 2020. REUTERS/Maxim Shemetov

LONDON, Sept 22 (Reuters) - Global record high natural gas prices are pushing some energy-intensive companies to curtail production in a trend that is adding to disruptions to global supply chains in some sectors such as food and could result in higher costs being passed on to their customers.

Some companies, including steel producers, fertiliser manufacturers and glass makers, have had to suspend or reduce production in Europe and Asia as a result of spiking energy prices. That includes two of the world’s largest fertiliser makers, which said they would cut production in Europe. The UK on Tuesday said it agreed to provide state support to one of the companies to restart production of by-product carbon dioxide, which is used in food production, to avert a supply crunch. read more

Natural gas prices have risen sharply around the globe in recent months. That has been due to a combination of factors: including increased demand particularly from Asia due to a post-pandemic recovery; low gas inventories; and tighter-than-usual gas supplies from Russia.

Gas prices in Europe have risen more than 250% this year, while Asia has seen about a 175% increase since late January. In the United States, prices have surged to multi-year highs and are about double where they were at the start of the year. Electricity prices have also risen sharply as many power plants are gas-fired.

Industrial Energy Consumers of America, a trade group representing chemical, food and materials manufacturers, has in recent days called on the U.S. Department of Energy to stop the country's liquefied natural gas producers from exporting gas to help keep the energy costs down for industry. read more

Additional supplies of gas could alleviate pressure. Norway has allowed increased gas exports. More supply could flow from Russia by the end of the year with the country’s new Nord Stream 2 pipeline awaiting approval from Germany’s energy regulator. The pipeline project has drawn criticism from the United States, which says it will increase Europe’s reliance on Russian energy supplies. read more

The pressures so far have been particularly acute in Europe, where gas stocks are much lower than usual heading into winter. Norway’s Yara International ASA (YAR.OL), one of the world’s largest fertiliser makers, on Friday said it would cut about 40% of its European ammonia production due to high gas prices. That came after U.S.-based CF Industries Holdings Inc (CF.N) said gas prices were prompting it to halt operations at two of its British plants. Natural gas is the most important cost input for nitrogen-based chemicals and fertilizers. read more

Yara’s chief executive, Svein Tore Holsether, told Reuters in an interview Monday that the company was bringing ammonia to Europe from production facilities elsewhere, including the United States and Australia. "Instead of using European gas, we are essentially using gas from other parts of the world to make that product and bring it into Europe," he said. read more CF Industries didn’t respond to requests for comment.

Some industries are calling on governments to intervene on their behalf. These pleas come as some countries have acted to protect consumers from soaring energy bills, such as Spain, which last week approved a package of measures including price caps.

Among those asking for help is the food industry following a shortage of carbon dioxide (CO2) caused by the suspension of production in some fertiliser plants. CO2 is used in the vacuum packing of food products to extend their shelf life, to stun animals before slaughter and to put the fizz in soft drinks and beer.

In the UK, meat processors had warned they will run out of CO2 within five days, forcing them to halt production. Soft drink manufacturers, who rely on the gas to make carbonated drinks, said supplies were running low. read more

On Tuesday, the British government said it struck a three-week deal with CF Industries for the American company to restart the production of carbon dioxide in the UK. Britain’s environment minister, who said the state support could run into tens of millions of pounds, also warned the food industry that carbon dioxide prices would rise sharply.

CF Industries said in a statement it is immediately restarting ammonia production at its Billingham plant following the agreement.

Other energy-intensive sectors such as steel and cement are also feeling the pinch.

Soaring gas prices have in the past couple of weeks "forced some steelmakers to suspend operations during those periods of the night and day when the cost of energy rockets," said Gareth Stace, director general at industry group UK Steel. He declined to identify which companies.

British Steel, the country’s second-largest steel producer, said it was maintaining normal levels of production but that the “colossal” energy-price increases made “it impossible to profitably make steel at certain times of the day.”

Some manufacturers say they are able to cope, so far.

Germany’s Thyssenkrupp AG, (TKAG.DE) Europe’s second-largest steelmaker, said hedging mechanisms it had in place against energy price increases, especially gas, meant it was not curbing production. But it said it was indirectly affected because the industrial gases it used are linked to electricity prices.

HeidelbergCement AG (HEIG.DE) of Germany, the world’s second-largest cement maker, said higher energy prices were driving up production costs but that operations had not been halted as a result.

In China, several steel, ceramic and glass makers have reduced production to avoid losses, according to Li Ruipeng, a local supplier of liquefied natural gas in the northern province of Hebei. And, China’s southwestern province of Yunnan this month imposed limits on production of some heavy industries, including producers of fertilisers, cement, chemicals, and aluminium smelters due to energy shortages, a move that analysts said could reduce exports.

To weather the storm, some energy-intensive industries and utility firms in Asia and the Middle East have temporarily switched from gas to fuel oil, crude, naphtha or coal, analysts and traders said. That trend is expected to continue for the rest of the year and into the beginning of next, according to the International Energy Agency, the Paris-based energy watchdog.

In Europe, demand for coal as an alternative power source has also risen significantly. But options for switching to alternative sources of energy are limited in the region largely due to government policies aimed at encouraging the use of gas over more polluting fuels such as coal.

The glass industry was historically run on fuel oil, but almost all sites in the United Kingdom have now transitioned to natural gas, according to Paul Pearcy, federation coordinator at British Glass, a UK trade association. Only a few sites have fuel oil tanks that enable them to switch energy source if prices skyrocket, he added.