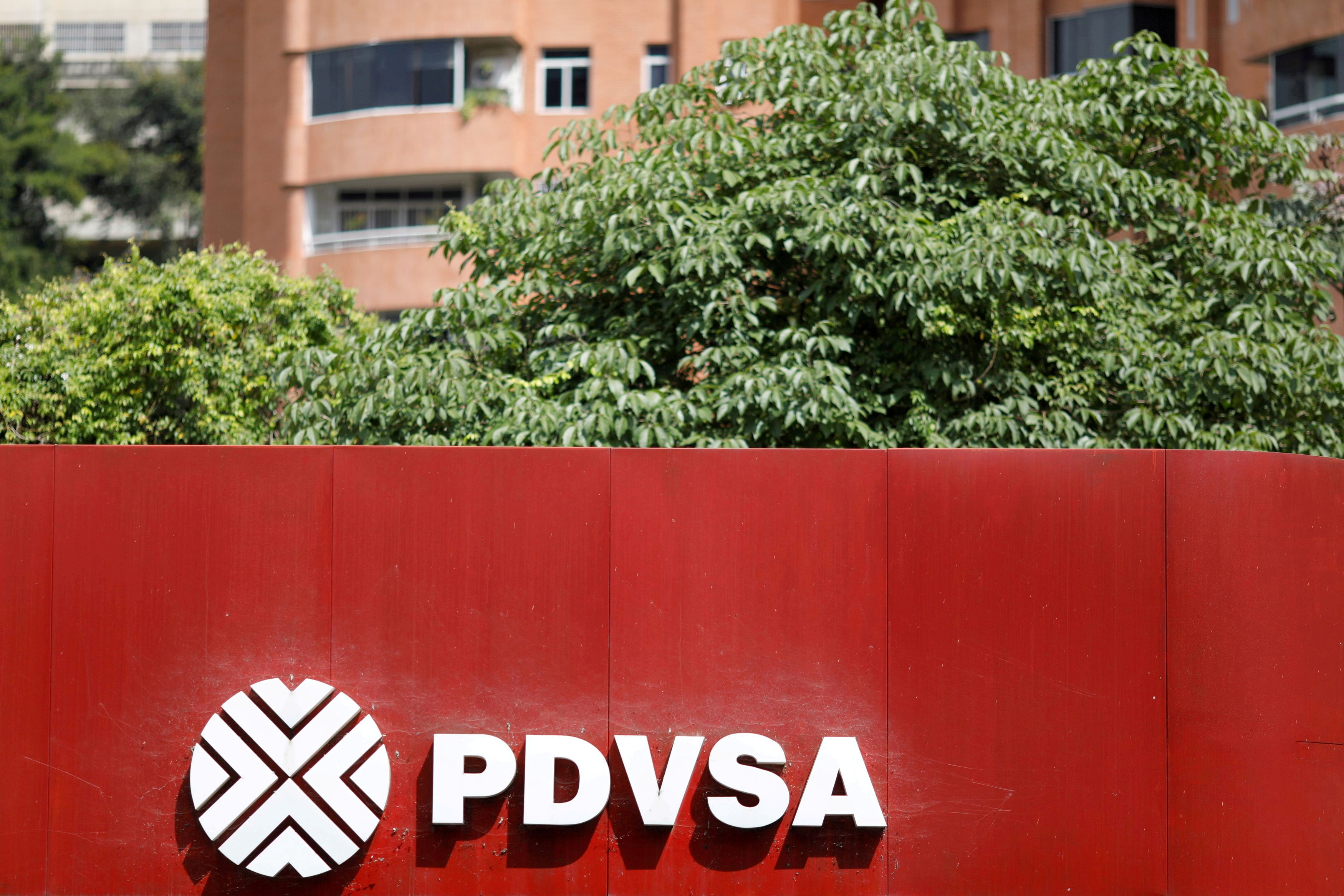 The corporate logo of the state oil company PDVSA is seen at a gas station in Caracas, Venezuela November 16, 2017. REUTERS/Marco Bello/File Photo

HOUSTON/CARACAS, Sept 27 (Reuters) - A 2.1-million barrel cargo of condensate supplied by Iranian National Oil Company (NIOC) to Venezuela's PDVSA, the first of a swap deal between the state-run firms, began discharging this week, according to two sources and tanker tracking data.

PDVSA and NIOC have agreed to a medium-term contract to exchange Venezuelan heavy crude for Iranian condensate in a pact aimed at boosting the South American nation's sagging oil exports, amid sanctions imposed by the United States. read more

The agreement is expected to regularize the flow of blending material for producing exportable crude grades from Venezuela's main oil region, the Orinoco Belt.

The condensate cargo arrived in Venezuelan waters late last week on Iran-flagged very large crude carrier (VLCC) Dino I, owned and operated by a unit of NIOC, according to the sources and vessel monitoring service TankerTrackers.com.

As of Monday, the vessel was discharging at PDVSA's main oil port, the Jose terminal, TankerTrackers.com said, even though its transponder was showing it on Iran's coast - a tactic often used by sanctioned oil producers to conceal the location of their fleets.

PDVSA and NIOC did not reply to Reuters questions on the exchange contract.

A second 2.1-million-barrel condensate cargo, contracted under the same swap agreement, is expected to arrive in Venezuelan waters in the coming weeks, the sources said.

The Iran-flagged tanker Dorena, whose transponder also shows it in Iranian waters, is currently underway to Venezuela, TankerTrackers.com said.

The U.S. Treasury Department told Reuters last week it was "concerned about reports of Iranian transactions with Venezuela involving petroleum and petroleum products", though it had not verified the details.

"We will continue to enforce both our Iran and Venezuela-related sanctions authorities," a Treasury spokesperson told Reuters in a written response on Friday.

A source in Washington with knowledge of the trade told Reuters that U.S. officials are monitoring Iranian shipments as they could help provide Venezuela's President Nicolas Maduro with more of a financial lifeline as he negotiates with the Venezuelan opposition over regional and local elections expected in November.

The swap contract officially started last week when a 1.9-million barrel cargo of Venezuelan heavy crude set sail from Venezuelan waters on Iranian tanker Felicity, according to sources with knowledge of the deal.

U.S.-sanctioned Venezuela and Iran have since last year strengthened their cooperation. Both their state-run oil companies are barred by the U.S. Treasury Department and can also be subject to secondary sanctions limiting business with non-U.S. companies.

Iran has provided food, medicine and gasoline to Venezuela and equipment to repair PDVSA's depleted refineries, while Venezuela has paid Iranian companies with jet fuel, heavy crude and other commodities it produces. read more

An Iran-flagged cargo ship, the Golsan, that last year delivered food to Venezuela and returned carrying alumina, discharged late in August at Venezuela's La Guaira port and is now on its way to Iran carrying back an undisclosed cargo, according to Refinitiv Eikon data.

Reporting by Marianna Parraga in Houston and Deisy Buitrago in Caracas; editing by Grant McCool
Posted by Crude Oil Daily at 3:34 PM