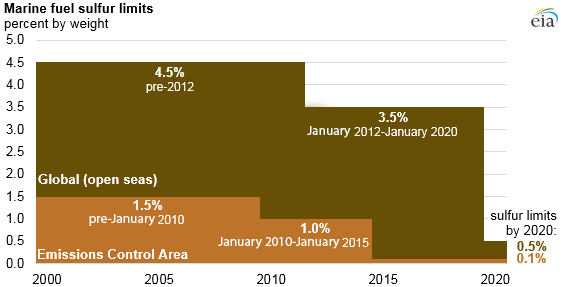 
MO has agreed to move forward with prohibiting the carriage of fuel oil for use on board ships, when it is not compliant with the new low sulfur limit, which comes into force from 2020.
The 0.5% limit on sulfur in fuel oil on board ships (outside designated ECAs, where the limit is 0.1%) will come into effect on 1st January, 2020.

To help ensure consistent implementation of this regulation, IMO’s Sub-Committee on Pollution Prevention and Response (PPR), which met between 5th-9th February, agreed draft amendments to MARPOL Annex VI to prohibit the carriage of non-compliant fuel oil, such that the sulfur content of any fuel oil used or carried for use on board ships shall not exceed 0.5%.

The exception would be for ships fitted with an approved ‘equivalent arrangement’ to meet the sulfur limit – such as an exhaust gas cleaning system (EGCS), which are already allowed under regulation 4.1 of MARPOL Annex VI.

These arrangements can be used with ‘heavy’ high sulfur fuel oil as an EGCS cleans the emissions and therefore can be accepted as being at least as effective at meeting the required sulfur limit.

Under regulation 3.2 of MARPOL Annex VI a ship undertaking trials for ship emission reduction and control technology research can be exempted by a signatory to Annex VI.

The Sub-Committee forwarded the proposed draft amendments to the MEPC 72 meeting in April, 2018, for urgent consideration. Once approved, the draft amendments could be adopted at MEPC 73 (October, 2018) and could enter into force on 1st March, 2020 - two months after the 0.5% limit comes into effect.

The urgency of the matter was recognised to the extent that MEPC 72 will be requested to consider whether the output on ship implementation planning for 2020 from the PPR inter-sessional meeting in July, 2018 should be forwarded to MEPC 73.

Consistent implementation of the 0.5% sulphur limit for all ships will ensure a level playing field is maintained, with the result that the expected improvement of the environment and human health will be achieved, IMO said.

In addition, the IMO has been looking at how to measure and report on Black Carbon emissions, as part of its work to consider the impact on the Arctic of emissions.

The Sub-Committee encouraged member states and international organisations to continue to collect Black Carbon data, using the agreed reporting protocol and the agreed measurement methods, and submit relevant data to the next session of the Sub-Committee.

PPR also agreed draft 2018 Guidelines for the discharge of exhaust gas recirculation (EGR) bleed-off water, for submission to MEPC 73, with a view to adoption.

In addition, PPR considered matters relating to the implementation of the Ballast Water Management Convention.

Draft guidance on system design limitations of BWMS and their monitoring, was agreed, for submission to MEPC 73 with a view to approval.

Meanwhile, the Sub-Committee invited submissions to the next session on specific examples of contingency measures acceptable to port states and implemented by the shipping industry, which could then be included in an annex to the guidance on contingency measures under the BWM Convention; and further submissions related to ports with challenging water quality.

PPR agreed to draft Guidelines for the use of electronic record books under MARPOL, for submission to MEPC 73 for consideration, with a view to approval in principle and subsequent adoption at MEPC 74, in conjunction with associated draft amendments to MARPOL and the NOX Technical Code.

The Sub-Committee also completed its revision of the IBC Code, including revised product lists and index.

The revised chapters 17 (summary of minimum requirements), 18 (list of products to which the code does not apply), 19 (index of products carried in bulk) and 21 (criteria for assigning carriage requirements for products subject to the IBC Code) and other amendments will be forwarded to MEPC 73 and to the Maritime Safety Committee (MSC 100) later this year for approval and subsequent adoption.
Posted by Crude Oil Daily at 11:46 AM