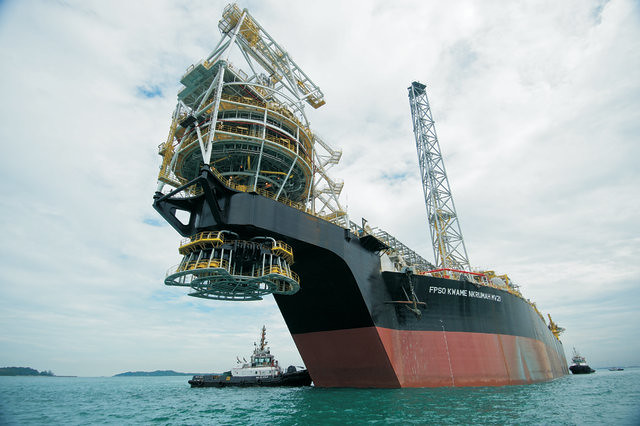 
Partners in Ghana's Jubilee oil field commenced a shutdown of the production Vessel FPSO Kwame Nkrumah here on Thursday to enable repair works on the damaged Turret Bearing on the vessel be effected, a release has said.

according to the release issued by operator, Tullow Oil late Thursday, the shut down is the first of two planned for the first quarter of the year.

"It is also another chance to conduct scheduled maintenance to improve process reliability," the statement added.

The partners had planned a total of three shut-down periods for the year, two in the first quarter and one in the last quarter for remedial works on the FPSO Turret Bearing and rolling back into place.

"The first shut-down which begins Thursday February 1, 2018 will be for an estimated three-week period. This shut-down coincides with the planned Ghana National Gas Company (GNGC) shutdown of the Atuabo Gas Processing Plant. Therefore there will be no supply of gas to the plant," the statement added.

Already civil society actors have expressed worry over frequent shutdowns of the FPSO Kwame Nkrumah with the fear that the West African gold, cocoa and oil producer would end up with huge revenue losses.

He recalled the shutdowns last year during which time the global prices were low, "and did not allow us to hit our revenue targets. That was a problem already last year."

"This year with the Turret Bearing and the Mooring issues it is important that as a country, we do detailed analyses of how these frequent shutdowns will affect the economy in general

"In terms of building other FPSO's we need to make sure we do not face such challenges," Bekoe said here on Wednesday in an interview.

Due to the uncertainty of the global oil market, the analyst argued that it was better to derive revenues now than to defer to the future.

However, Head of the Oil and Gas Unit at the Ministry of Finance, Joseph Asenso allayed the worries, explaining that since the shutdowns had been planned earlier these were factored into revenue projections in the 2018 budget, and Gross Domestic Product (GDP) projections, hence there would be no revenue loss or drop in GDP as far as projections were concerned.

"So the impact if it stays within the time frame, then it will not be felt, but if it exceeds, which is quite unlikely that is when will have a problem," Asenso indicated.

Ghana's assumed price for crude in the 2018 budget was 57.3 U.S. Dollars. However, prices on the global stage have already hit 65 dollars per barrel, and Asenso was optimistic that would mean revenue overshot for the country which would be paid into the Petroleum Holding Funds.
Posted by Crude Oil Daily at 11:57 AM