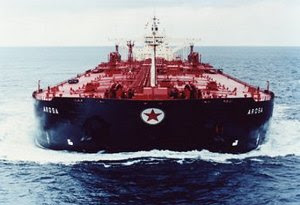 Earnings for the biggest crude tankers will be 25 percent lower next year than previously estimated as increased U.S. shale-oil production curbs imports into the country, DNB ASA said.

“U.S. seaborne imports of crude oil are set to be dramatically reduced in the coming years, mainly due to the large expected increase in domestic crude production,” analysts including Nicolay Dyvik said. “All else equal, this will be negative for the crude oil tanker market.”

Annual imports into the U.S., the world’s biggest oil consumer, are set to fall by 550,000 barrels a day, DNB estimated. Each VLCC can hold 2 million barrels of crude, double the capacity of a Suezmax.

To contact the reporter on this story: Michelle Wiese Bockmann in London at mwiesebockma@bloomberg.net

To contact the editor responsible for this story: Alaric Nightingale at anightingal1@bloomberg.net
Posted by Crude Oil Daily at 10:02 AM