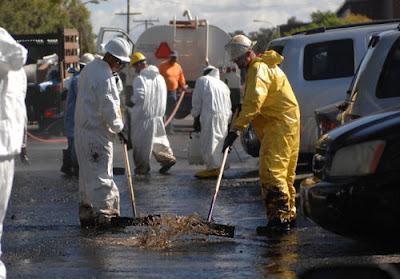 http://www.contracostatimes.com/california/ci_21837027/signal-hill-tank-farm-oil-spill-clogs-signal
10/23/12 - A cleaning crew works on 28th street in Signal Hill after an oil spill occurred from a leak on an above ground tank located on 27th St and Olive. Atlantic Ave between Willow St and Spring St is blocked off to Vehicle traffic. Pedestrian traffic is blocked off on the east side of Atlantic Ave between Patterson and Columbia Ave. Access to Long Beach Memorial is open on Long Beach Blvd side south of Spring St. Closure is expected to last the next 24 hours. Los Angeles County Fire Department is on scene and handling the spill. Photo by Brittany Murray / Staff Photographer
http://www.tankstoragemag.com/industry_news.php?item_id=5541

Oil spilled from a tank farm at Signal Hill in Los Angeles, California on 23 October following a pumping fault.

The oil entered a public neighbourhood and was seen flowing down streets, resulting in a shutdown of roads and a major intersection. Police urged drivers to steer clear of the area.

According to Los Angeles County Fire Inspector Quvondo Johnson, some oil did flow into the storm drain system, although the exact volume is not yet known. The storm drain empties into local waterways and authorities from the California Department of Fish and Game and the US Coast Guard responded to the leak for fear of contamination.

Los Angeles County Health and Hazmat crews were also called the incident, which was reported just before 8am.

The spill was caused when a high pressure line pumping crude oil into a tank backed up and overflowed.

The oil was contained within 30 minutes, with clean-up expected to take around one day. Johnson said the spill is 'static' and 'under control', with the team now 'working on clean-up'.

It is now up to state authorities to determine whether the tank farm should be fined.
Posted by Crude Oil Daily at 11:44 AM