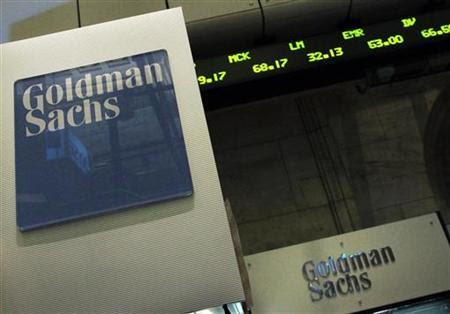 A Goldman Sachs sign is seen over their kiosk on the floor of the New York Stock Exchange, April 26, 2010.
Credit: Reuters/Brendan McDermid
http://www.reuters.com/article/2012/10/18/us-goldman-crude-research-idUSBRE89H0LC20121018

LONDON (Reuters) - Wall Street giant Goldman Sachs (GS.N), one of the biggest banks in commodity trading, slashed its oil price forecast following years of super-bullish recommendations as it said oil output was soaring in the United States and Canada.
Goldman, which up until now had the highest oil price prediction among major forecasters, said on Thursday it cut its 2013 Brent crude oil price forecast to $110 a barrel from the previous $130 per barrel.

On a longer term basis, the bank now expects Brent prices to stabilize at $90 a barrel. Brent was trading at around $112.8 on Thursday.

"Over the past three years long-dated Brent crude oil prices have shown signs of stabilizing around $90 per barrel. This suggests a return to the pricing regime that characterized the crude oil market in the 1990s," Goldman said.

"We expect that going forward long-dated oil prices will be anchored by the potential for substantial growth in crude oil supplies from U.S. shale, Canadian oil sands, and the deepwater. Net, we see a return to a structurally stable, but cyclically tight market," said Goldman.

The U.S. shale oil boom, which saw the country's oil production rising to multi-decade highs, caught many industry watchers and specialists by surprise and has dramatically reshaped the global oil flows over the past few years.

The United States is now importing less crude from West Africa and the Middle East, leaving more volumes for booming demand in Asia.

Goldman was one of the main and most accurate forecasters of the 2003-2008 oil price boom, when unexpectedly robust demand in Asia outpaced global supply and prices soared on fears that the Organization of the Petroleum Exporting Countries (OPEC) would lack spare capacity to meet further demand.

Goldman was, however, slow to revise its bullish forecast downwards when financial crisis hit the global economy in 2008 and oil prices fell four-fold to below $40 per barrel from their peaks of $147 in July 2008.

"Goldman was a little out of kilter with their $130 call. We have nudged up to that level on occasion but that's when you see U.S. gasoline go above $4 a gallon and that has a behavioral response," said Will Riley, who helps co-manage $284 million at the Guinness Global Energy Fund.

"$110 is still a high price for oil globally, but it's probably more affordable for people and you are less likely to see demand destruction at that level," he added. (Reporting by Dmitry Zhdannikov and Claire Milhench; Editing by Anthony Barker)
Posted by Crude Oil Daily at 10:35 AM