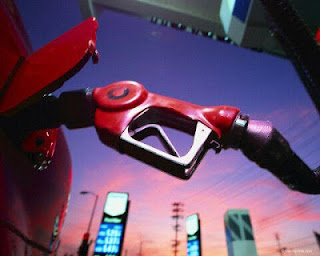 LOS ANGELES (AP) — It's a record, though just barely. The price of gasoline hit an all-time average high in California of $4.6140 a gallon Saturday, fueled by a reduced supply and a volatile market.

Prices throughout the state were expected to increase for several more days before leveling off, after a temporary reduction in supply triggered a price spike that saw fuming motorists paying $5 or more per gallon in some locations and station owners shutting down pumps in others.

AAA's Daily Fuel Gauge report released Saturday said the average price for a gallon of regular unleaded across California rose 12 cents from its Friday mark of about $4.49.

Saturday's price was the highest in the nation, with the Golden State leapfrogging Hawaii this week as the state with the most expensive fuel. The average price for a gallon of regular unleaded across California was 47 cents more than a week ago, according to the AAA report.

"I seriously thought it was a mistake on the sign when we pulled in," said Nancy Garcia, 34, while filling her Honda Accord at a Chevron station in the Los Angeles neighborhood of Highland Park. She paid $4.65 a gallon for regular grade and said she couldn't afford to fill her tank all the way.

When supplies drop, wholesale prices rise. Then distributors and station owners have to pay more to fill up their station's tanks. They then raise their prices based on how much they paid for their current inventory, how much they think they will have to pay for their next shipment, and, how much their competitors are charging.

The national average Saturday was about $3.81 a gallon, the highest ever for this time of year. However, gas prices in many other states have started decreasing, which is typical for October.

The dramatic surge came after a power outage Monday at a Southern California refinery that reduced supply in an already fragile and volatile market, analysts said, but the refinery came back online Friday and prices were expected to stabilize by next week.

Patrick DeHaan, senior petroleum analyst at GasBuddy.com, predicted the average price could peak as high as $4.85.

"There is some relief in sight but probably not for a couple of days. Early next week is when we may see some more significant declines ... but at retail prices, prices may climb for the next two to three days before they start to come down," he said.

While prices were higher everywhere in California, there were variances Saturday. Chico had the lowest average price at $4.46, according to AAA, while San Luis Obispo was highest at $4.71. Prices averaged $4.67 in San Diego, $4.66 in the Los Angeles area, $4.55 in Fresno and $4.49 in Sacramento.

The price of diesel has also increased, adding significant costs for truckers who typically put hundreds of dollars of fuel in their tanks. It's gotten so bad, some truckers may stop driving altogether, said Michael Shaw, spokesman for the California Trucking Association, whose members move 80 percent of the cargo on California's roads each year.

"The fluctuation and rapid increase of prices makes it difficult to plan ahead and take on new contracts," he said. "It's difficult to operate in that environment."

A web of refinery and transmission problems is to blame, analysts said. The situation is compounded by a California pollution law that requires a special blend of cleaner-burning gasoline from April to October, said Denton Cinquegrana, executive editor of the Oil Price Information Service, which helps AAA compile its price survey.

"We use the phrase 'the perfect storm,' and you know what, this current one makes those other perfect storms look like a drizzle. I don't want to scare anyone, but this is a big problem," Cinquegrana said. "Run-outs are happening left and right."

Among the recent disruptions, an Aug. 6 fire at a Chevron Corp. refinery in Richmond that left one of the region's largest refineries producing at a reduced capacity, and a Chevron pipeline that moves crude oil to Northern California also was shut down.

There was some good news, however.

Exxon Mobil Corp. said a refinery in Torrance returned to normal operations Friday after the power failure Monday disrupted production for most of the week. State officials said with the refinery coming back online, prices should start falling.

Gasoline inventories in California, however, are still at their lowest point in more than 10 years, a situation made worse by the mandate for the special summer gasoline blend. Few refineries outside the state can make it, meaning there are few outside sources to draw from for help, Cinquegrana said.

The California Air Resources Board was reviewing a request from the California Independent Oil Marketers Association for a waiver that would allow gas stations to begin selling winter-blend gasoline before Halloween.

Some stations ran out of gas and shut down rather than take the risk of buying gas at soaring prices only to be stuck with a glut of overpriced fuel if prices dropped or if customers refused to absorb the extra cost that would be passed along to them.

Mark Mitchell, co-owner of the Coast Oil fuel distributorship in San Jose, told the San Francisco Chronicle that none of the gas stations he serves had shut down, although some station owners had discussed it. When spot prices hit their peak, the stations would need to charge about $4.89 to break even, he said.

"We get the gas — it's just at what price?" Mitchell told the newspaper. "You're not going to sell much when it goes up 40 cents in a day."

Contributing to this report were AP writers Sandy Shore in Denver, Gillian Flaccus in Los Angeles, John Marshall in San Francisco and Gosia Wozniacka in Fresno
Posted by Crude Oil Daily at 10:11 AM