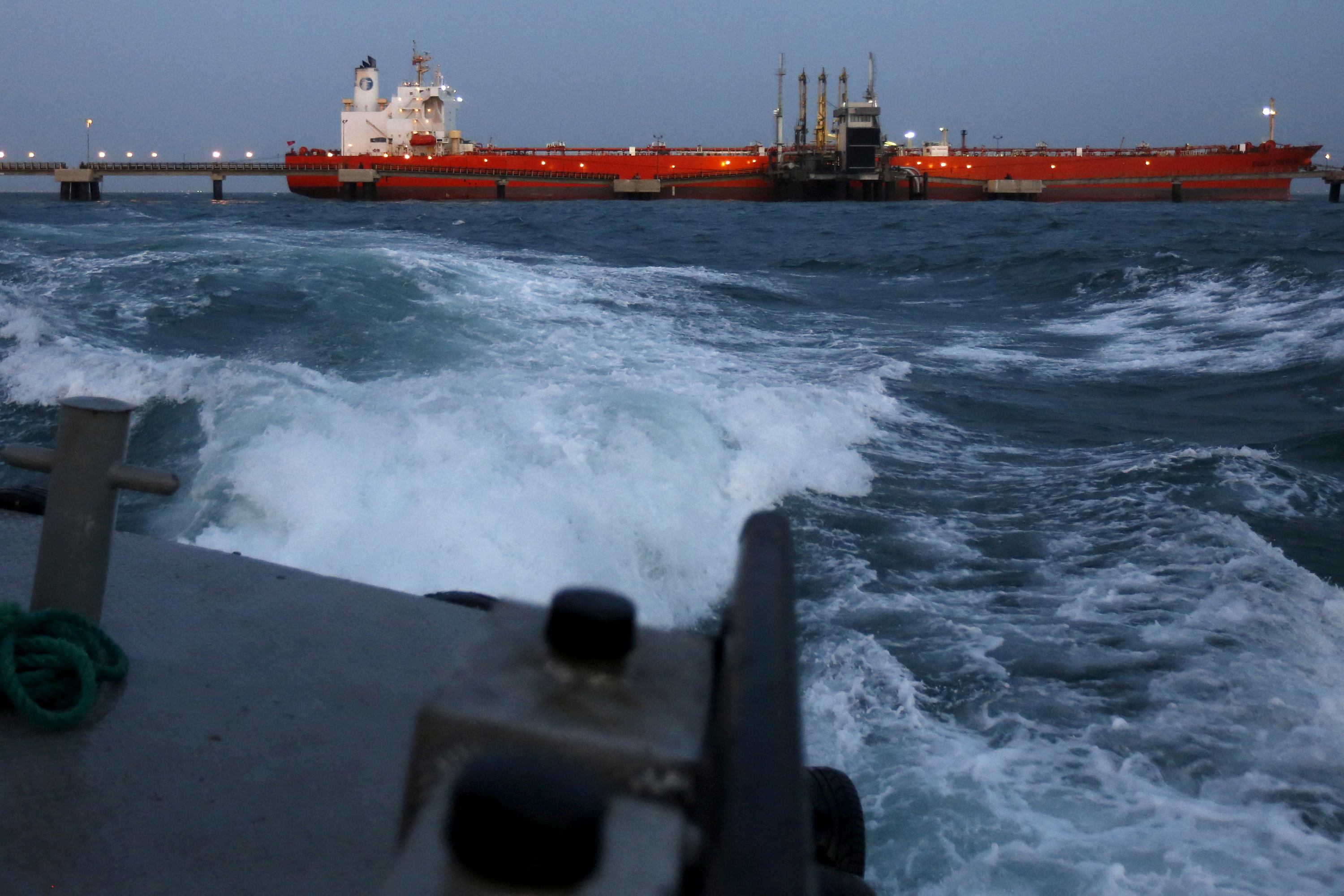 An oil tanker is docked while oil is pumped into it at the ships terminal of PDVSA's Jose Antonio Anzoategui industrial complex in the state of Anzoategui April 15, 2015. REUTERS/Carlos Garcia Rawlins/File Photo

CARACAS/HOUSTON, March 31 (Reuters) - Venezuela's state-run energy firm PDVSA is in talks to buy and lease several oil tankers amid a possible expansion in exports, according to three sources and a document seen by Reuters, a sign the country expects U.S. sanctions on its petroleum sector to be eased.

Russia's invasion of Ukraine has set off a global hunt for new oil supplies, especially the heavy oil produced by Venezuela. A high-level meeting between U.S. and Venezuelan officials in Caracas this month opened the door for talks over sanctions imposed on PDVSA in 2019, which were later reinforced by former U.S. President Donald Trump as part of his "maximum pressure" campaign to oust Venezuelan President Nicolas Maduro.

The Trump administration's sanctions in 2020 led to a total cut of export authorizations covering most foreign energy firms in joint production with PDVSA. The suspension left companies including Chevron Corp (CVX.N), Eni SpA (ENI.MI) and Repsol SA (REP.MC) with billions of dollars in unpaid dividends and debts that had been settled through Venezuelan oil cargoes. read more

Executives from PDVSA's maritime arm, PDV Marina, and the company's Trade and Supply division recently met with several firms offering tankers. All were willing to take Venezuelan crude or refined products as payment for the vessels, according to the document and sources who spoke on condition of anonymity.

"PDVSA's tanker fleet is too short for any increases in oil production for domestic refining or exports," one of the sources said.

PDVSA did not reply to a request for comment.

PDVSA's aging fleet, composed of about 30 owned tankers, has been forced to mostly remain in Venezuelan waters after underinvestment and lack of repairs for more than a decade, according to Refinitiv Eikon data and sources.

The country's crude oil and petroleum exports have tumbled under U.S. sanctions, to about 650,000 barrels per day (bpd) last year, from more than 1.5 million bpd in 2018.

U.S. sanctions stopping PDVSA from renewing its vessels' insurance and classification, which certifies they are seaworthy, have in recent years curtailed the firm's ability to use the ships for exports, leading it to rely largely on a group of third-party tankers that often lift crude at Venezuelan ports, sources and documents from the state company showed.

In one of the proposals seen by Reuters, a company whose name was redacted from the document, offered five Aframax tankers, each with the capacity to transport up to 700,000 barrels of oil, under a lease contract with an option to buy them.

It required PDVSA to pay between $22,500 to $35,000 per day for up to 12 months to lease each vessel under a time-charter contract. Those ships would progressively be replaced by new ones after the first year with payment for the new tankers through four million barrels of Venezuelan fuel oil valued at $300 million, according to the proposal.

That company also proposed to blur PDVSA's ownership of the new tankers through a chain of intermediaries, which would reduce the risk of retentions or seizures by the United States if sanctions remained in effect.

PDVSA in 2020 offered to ship its own oil, figuring in the costs in crude supply deals to help customers that struggled to hire vessels due to U.S. sanctions, but the contracts were short-lived due to lack of enough Venezuelan vessels.

The company that year also lost three of four very large crude carriers it bought from China over payment disputes. Earlier this year, PDVSA had to send a crew to rescue the remaining one, which was in distress for weeks in Asia.

Washington between 2019 and 2020 blacklisted vessel owners and operators that carried Venezuelan oil, but in the last year has not enforced similar maritime sanctions. Still, many shipping firms continue to avoid Venezuelan waters because of the U.S. measures, forcing large price discounts on the South American country's oil.