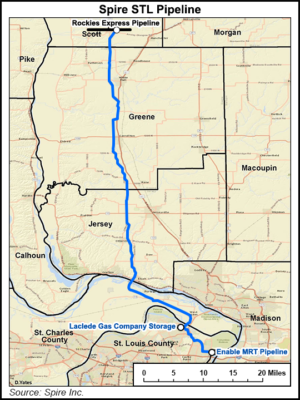 The U.S. Supreme Court on Monday declined to hear a St. Louis-based natural gas company's appeal of a lower court's decision that could close a pipeline that runs through parts of Illinois and Missouri.

The Federal Energy Regulatory Commission granted approval for the pipeline in 2018 and it became fully operational in 2019. The Spire STL Pipeline connects with another pipeline in western Illinois and carries natural gas to the St. Louis region, where Spire serves around 650,000 customers.

The Environmental Defense Fund sued in 2020, raising concerns that the pipeline was approved without adequate review. In June, a three-judge panel of the U.S. Court of Appeals for the District of Columbia ruled that FERC had not adequately demonstrated a need for the project, vacating approval of the pipeline.

EDF attorney Erin Murphy said in a statement Monday that the lower court ruling found “serious flaws” in FERC’s approval, “including failing to assess the harms to ratepayers and landowners.”

As the case played out in court, FERC last year issued a temporary certificate allowing the pipeline to remain operational. The temporary order continues to stand while the agency considers Spire's appeal to FERC seeking new approval of the pipeline.

“We are confident that when people have an opportunity to review the proven benefits of the STL Pipeline, they will agree that there is a critical need to keep this infrastructure fully operational to ensure continued access to reliable, affordable energy for families and businesses in the greater St. Louis region,” Smith said in a statement.