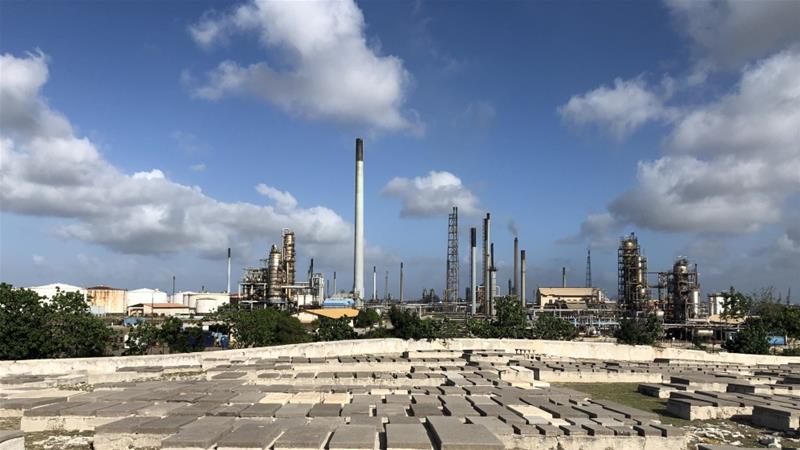 The Isla oil refinery in Curacao, as seen from the cemetery west of the complex towards which pollutants have been emitted for decades [Ben Piven/Al Jazeera]


(Reuters) - Curacao is pursuing a $162 million arbitration claim against Venezuela’s state-run PDVSA oil firm over its management of the island’s oil refinery, an executive of Refineria di Korsou said on Monday.

Curacao separately expects a contract with commodities firm Klesch Group to operate the 335,000-barrel-per-day Isla refinery and its storage facilities will be delayed. Klesch is committed to the deal but any agreement may be delayed until May or June because of travel restrictions due to the coronavirus pandemic, de Lannoy said.

Globally, demand for oil and petroleum products have fallen due to the pandemic, slashing prices and profit margins for many refineries. But the sharp price has lifted demand for storage space, including at the island’s Bullenbay oil terminal, with its 17.75 million barrels of storage and blending capacity.
PDVSA ran RdK’s Isla refinery on Curacao for about 34 years through last year. U.S. sanctions against Venezuela led to a halt of operations. PDVSA failed to make lease payments, did not meet take or pay agreements with RdK or fulfill maintenance requirements, de Lannoy said.

Neither PDVSA or the Venezuelan oil ministry immediately responded to requests for comment.

RdK’s claim was filed earlier this month at the International Centre for Dispute Resolution, an arbitration group in New York, de Lannoy said. An ICDR spokesman said the group does not comment on its work.

A Dutch court in Curacao authorized a legal attachment of the Bonaire Petroleum Corp site. De Lannoy said Curacao would seek to auction the site if it wins the arbitration case.

PDVSA and the Venezuelan government have missed billions of dollars in payments to creditors in recent years as the once prosperous OPEC nation’s economy unraveled, putting many of its overseas assets at risk of seizure.