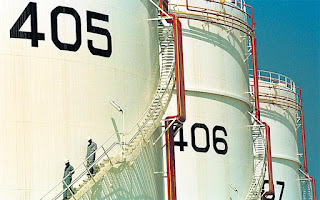 ‘Sinopec is facing a lot of uncertainties this year. Its refining segment is still losing money due to high crude prices. Its petrochemical business is also deterioteriating due to rising cost and weaker demand,’ Yan Shi, analyst at UOB Kay Hian, said on Monday.

Sinopec's profitability may have improved slightly after the government hiked domestic petrol and diesel retail ceiling prices by 6-7 percent from March 20, and raised the threshold of windfall tax on crude oil production from $40 per barrel to $55 per barrel.

However, with crude oil prices being pushed up by ongoing tensions between Iran and the West over its disputed nuclear programme, Sinopec estimated in its annual report on Sunday that crude oil ‘will generally fluctuate in a high range’.

Chinese oil firms make a profit on oil and gas production, fuel sales and chemical businesses but their refineries bear the brunt of losses caused by government price controls.

Unlike PetroChina and CNOOC, which derive most of or all of their revenue from exploration and production, Sinopec is heavily focused on the downstream refining segment.

Sinopec is expected to receive a gradual injection of overseas producing assets from its parent Sinopec Group,and the move should benefit Sinopec Corp shareholders in the long run, analysts say.
Posted by Crude Oil Daily at 9:54 AM