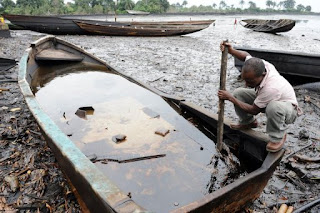 LAGOS — Sabotage has led to six oil spills from one Shell pipeline in Nigeria since the start of the month, the company said on Monday, while damage to another line has caused a temporary production halt.

The six spills have occurred along the Okordia-Rumuekpe trunk line at Ikarama in Bayelsa State in the oil-producing Niger Delta region, the Anglo-Dutch oil giant said in a statement.

A fire broke out at one of the spill sites on August 18, but it has since been put out, the company said.

The spills were caused by "hacksaw cuts by unknown persons," it said. The six leaks have been repaired, though an activist has said spilled crude has not been sufficiently cleaned up.

"The 33-kilometre line receives crude oil from two flowstations which were shut down as SPDC worked to repair the leaks," it said. SPDC is Shell's Nigerian joint venture, the Shell Petroleum Development Company.

In a separate incident on Sunday, "another three hacksaw cuts were reported on the nearby Adibawa delivery line. SPDC is mobilising to repair this line and production is shut-in."

"We are concerned by the increasing cases of sabotage at Ikarama and appeal to those causing these incidents to stop for the sake of the environment, their personal safety and well-being of the communities," Shell vice president Tony Attah said in the statement.

Pipeline damage and associated spills are common in the Niger Delta region as a result of oil theft to feed the lucrative black market.

Militants claiming to be fighting for a fairer distribution of oil revenue have also regularly blown up pipelines, though such attacks have decreased since a 2009 amnesty deal.

Shell said in the statement that more than 75 percent of all oil spills and more than 70 percent of oil spilled from its Nigerian joint venture facilities in the Niger Delta from 2006-2010 were caused by sabotage and crude theft.

Activists say oil firms such as Shell have not done enough to prevent such incidents.

A UN report earlier this month said decades of oil pollution in the Ogoniland area of the Niger Delta, located in neighbouring Rivers state, may require the world's largest ever cleanup.

Nigeria is Africa's largest oil producer and the continent's most populous nation.
Posted by Crude Oil Daily at 9:25 AM