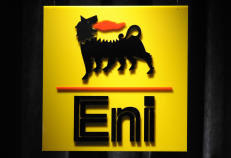 http://www.mysanantonio.com/news/article/Italy-s-Eni-eyes-restart-of-operations-in-Libya-2145862.php
CAIRO (AP) — Italian oil giant Eni SpA said Monday it signed a memorandum with Libya's rebels to restart a key natural gas pipeline and provide technical assessment of the country's oil infrastructure in hopes of quickly restarting its operations in the North African nation.
The deal came as Eni's chief executive, Paolo Scaroni, was in Benghazi meeting with officials from the National Transitional Council, Libya's rebel government. Eni was the largest foreign producer in the country before the civil war broke out, and its operations, mirroring Libya's oil sector in general, ground to a halt because of the fighting.
Under the terms of the deal, Eni and the NTC "are committed to creating the conditions for a rapid and complete recovery of Eni's activities in Libya and to doing all that is necessary to restart operations on the Greenstream pipeline," the company said in a statement.
The roughly 310-mile (520-kilometer) pipeline can carry about 11 billion cubic meters per year of natural gas from Libya's coast to Sicily, but it has not been operational since late February.
The deal reflects Rome's eagerness to re-enter the Libyan market and take stock of its billions of dollars in investments in the OPEC nation.
Italy, Libya's former colonial master, was among the most visible in courting Gadhafi after sanctions were lifted almost a decade ago. Libyan investments in Italy included a stake in Eni and banking giant Unicredit.
Before the protests against Gadhafi in mid-February morphed into a full-scale civil war, Eni was producing 273,000 barrels of oil equivalent per day in Libya, which sits atop Africa's largest proven reserves of conventional crude.
With the rebels firmly in control of much of the country, including the capital, Tripoli, international recognition of their status as the country's rightful representatives has rolled in. That has largely lifted the cloud of uncertainty companies endured in trying to deal with sanctions on Gadhafi's regime, frozen Libyan assets and, most troubling, the future under a rebel-led government for their investments in Libya.
Italy earlier pledged to provide the Benghazi-based government with funds and technical assistance through Unicredit and Eni, and Monday's memorandum appeared to be another step in re-cementing the links between the two countries.
Eni said in a statement that as part of an agreement signed between Rome and the NTC in late May, it would provide a supply of refined petroleum products to help the Libyan people deal with their current humanitarian challenges.
The fighting has essentially dried up oil output in the country, which produced about 1.6 million barrels per day before the outbreak of fighting. With little to no crude flowing through the pipelines, refineries have largely halted operations, and fuel prices have spiked during widespread shortages.
Since the war began, the rebels have managed to export a single cargo of crude oil, and analysts are divided on how long it will take to get crude flowing again at significant levels in the country. While the rebels said it could come within a matter of weeks, some experts and companies, including Eni, believe it could take up to a year to get output back to prewar levels.
In large part, the timeframe hinges on how much damage the infrastructure and the fields have sustained. Some refineries were damaged, and there are concerns that the fields were not capped properly as foreign workers who provide much of the technical know-how and labor fled the fighting.
Eni said it will provide technical assistance to assess the condition of the facilities and oil infrastructure in the country, and "to define the type and extent of operations required to safely restart operations."
Read more: http://www.mysanantonio.com/news/article/Italy-s-Eni-eyes-restart-of-operations-in-Libya-2145862.php#ixzz1WQwv3ta3
Posted by Crude Oil Daily at 11:55 AM