Fight for Gaddafi compound will be hard: rebels 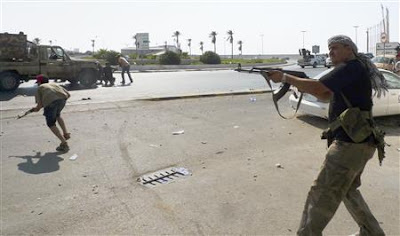 (Reuters) - The battle to take over Muammar Gaddafi's compound in Tripoli will be fierce, but anyone inside has little chance of escape, a rebel spokesman told Al Jazeera television on Monday.

"I don't imagine the Bab Al-Aziziyah compound will fall easily and I imagine there will be a fierce fight," Abdel Hafiz Goga, spokesman for the rebel National Transitional Council, said in an interview aired by the broadcaster.

"The rebels are forming checkpoints at the entrances of Tripoli and I do not think he (Muammar Gaddafi's son Mohammad) would be able to escape Tripoli, and the same applies to Colonel (Muammar) Gaddafi," he said.

The veteran Libyan leader's whereabouts since rebels took over most of Tripoli are unknown.

Mohammad, Gaddafi's eldest son, escaped on Monday from his Tripoli residence after he had been surrounded by rebel forces that had streamed into the city. Two other of Gaddafi's sons remain under arrest.

Gaddafi's huge Tripoli complex, which includes military barracks, has been targeted by NATO air strikes in recent weeks, but rebels said on Monday that it was still being defended by tanks and snipers.

Bab Al-Aziziya was the target of a 1986 U.S. bombing of Libya. President Ronald Reagan said it was in retaliation for what he called Libyan complicity in the bombing of a Berlin night club.

An Al Jazeera correspondent in Tripoli said on the air on Monday night that the situation in the city appeared mostly calm, but there was occasional gunfire and few people in the streets.