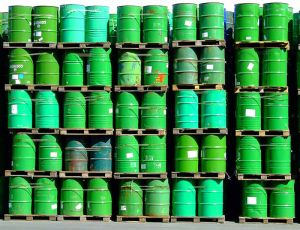 --Oil futures drop as low as $82.54/Bbl as traders flee from risky assets

By Jerry A. DiColo
Of DOW JONES NEWSWIRES

Light, sweet crude for September delivery recently traded $4.38 lower at $83.20 a barrel on the New York Mercantile Exchange, after falling as low as $82.54 earlier in the session.

Oil fell throughout the overnight session, but losses piled up after a survey from the Philadelphia Federal Reserve showed manufacturing activity contracted sharply in August.

The Philadelphia Fed said its index of general business activity within the factory sector fell to -30.7 this month from 3.2 in July and -7.7 in June. Any reading below zero indicates a contraction.

The data suggest dour prospects for the U.S. manufacturing sector, a heavy user of oil and raw materials.

"The fact is it's a weak economy. That's why the markets fell two weeks ago and nothing has changed," said Dominick Chirichella, an analyst at the Energy Management Institute.

Commodities declined across the board, led by oil, copper and cotton.

In addition to a slowing U.S. economy, investors are running from risky assets due to the uncertainty surrounding how policy makers will act to contain the crisis in Europe and what the Federal Reserve may do to spur the economy, said Carl Larry, director of research and derivatives at Blue Ocean Brokerage.

"Nobody wants to lay out on risk," Larry said.

New fears have also emerged about Europe's ability to cope with sovereign debt. U.S. regulators are intensifying their scrutiny of the U.S. arms of Europe's biggest banks, The Wall Street Journal reported, a sign of fears that Europe's debt crisis could spread to the U.S.

Thursday's declines mimicked the sharp moves seen last week when oil plunged below $76 a barrel. Crude rallied back to $89 a barrel Wednesday, after a surprise drop in U.S. gasoline stockpiles, but analysts still expect high volatility.