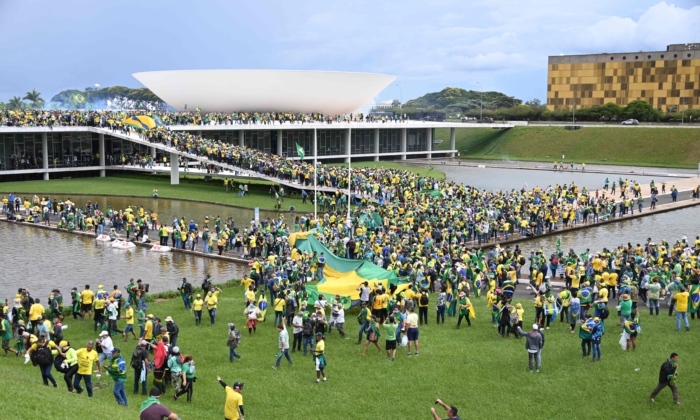 A crowd of protesters broke through security blockades and breached the buildings of Brazil’s Congress, Supreme Court, and the presidential palace in Brasília on Jan. 8, according to videos from local broadcasters and groups related to Brazil’s former president, Jair Bolsonaro.

Footage and photographs from the scene show protesters inside the presidential palace and smashing furniture in the National Congress building and the Supreme Court. The three buildings are linked by the spacious Three Powers Square in Brasília, the nation’s capital.

Recently inaugurated President Luiz Inácio Lula Silva was on a trip to São Paulo—Brazil’s most populous state—when the breach occurred.

Mass protests have persisted in Brazil since the outcome of the national election on Oct. 30, 2022. Bolsonaro’s supporters doubt the authenticity of the results. They’ve blockaded major roads across Brazil and demanded that the military step in to intervene.

Lula, a socialist, was declared the winner with 50.9 percent of the vote. Bolsonaro hasn’t publicly conceded but said in a speech in November 2022 that he would abide by the country’s constitution.

In a series of tweets on Jan. 8, Lula blamed Bolsonaro for the riot.

“They took advantage of the silence on Sunday, when we are still setting up the government, to do what they did,” the Brazilian president wrote. “And you know that there are several speeches by the former president encouraging this. And this is also his responsibility and the parties that supported him.”

In a video statement, Lula said all those involved in the riot would be found and prosecuted.

Bolsonaro’s social media channels—and those of his attorney and sons—were silent as of 5 p.m. EST on Jan. 8.

Bolsonaro left Brazil for Florida two days prior to the end of his term. In Twitter messages hours prior to the reports of the breach in Brasília, he wrote about the achievements of his administration.

A video clip from the scene in Brazil shows people, many draped in the nation’s green and yellow flag, flooding across a green lawn toward the National Congress building.

In one video, protesters are seen bashing the windows of the National Congress lobby with a metal barricade and a concrete paver. A video from inside the Congress building shows a stream of people walking across the broken glass with chants from the crowd outside echoing in the halls. One recording shows a fire and a sprinkler jetting water and documents scattered across the wet floor in the Congress building.

Presence by police and security forces appeared very limited in early crowd footage. Another clip shows protesters beating a mounted police officer with sticks and dragging him off of his horse.

Aside from a handful of protesters engaged in vandalism, the crowds in the footage appeared mostly peaceful. The scene was reminiscent of the Jan. 6, 2021, events in Washington, where a crowd of supporters of former President Donald Trump clashed with police and briefly breached the Capitol.

Brazil: A Last Stand in the Americas | Documentary

Lula’s Workers Party asked the office of the top public prosecutor to order police to contain the protesters.

Some Bolsonaro supporters have camped outside military barracks since his defeat and have called for the military to step in.

The governor of Brasília told Reuters that all security forces have been activated to confront the demonstrators.

Ibaneis Rocha, governor of the Federal District, wrote on Twitter that he had fired the district security chief and “put all the security forces on the streets, with the determination to arrest and punish those responsible.”

“This absurd attempt to impose the will by force will not prevail,” Dino wrote on Twitter on Jan. 8, noting that additional security forces have been deployed by the government of the Federal District.

The speaker of the lower chamber of Brazil’s Congress, Arthur Lira, likewise condemned the attack.

“The National Congress has never denied a voice to those who want to demonstrate peacefully,” Lira wrote on Twitter. “But it will never give room for turmoil, destruction and vandalism.”

“Fascism decides to strike. The right has not been able to maintain the pact of non-violence,” Colombian President Gustavo Petro wrote on Twitter.

“Unpresentable attack on the three powers of the Brazilian State by Bolsonaristas,” Chilean President Gabriel Boric wrote on Twitter. “The Brazilian government has our full support in the face of this cowardly and vile attack on democracy.”

Reuters and The Associated Press contributed to this report.