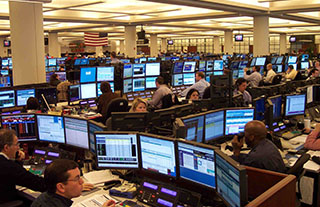 Retail investors with long positions in crude oil markets had to endure one of the most volatile years on record in 2020 thanks to the Saudi-Russia oil price war, oil price crash, and a global pandemic that dealt a massive blow to energy demand.

However, it was yet another annus mirabilis for large oil traders who took full advantage of the choppy markets and a massive spike in volatility to make a killing on oil trades.

Bloomberg reported that dozens of large oil traders made billions of dollars in profits in 2019, with many posting record earnings thanks to a rocky oil market. 2020 was more of the same, only better this time after top oil and commodity traders posted record profits mostly by leveraging the famous contango plays.

Vitol is the world’s largest independent oil trader, moving ~8 million barrels of petroleum products each day to meet the needs of the UK, Germany, France, Spain, and Italy.

Vitol made a significant chunk of its oil fortunes during the tumultuous second quarter when global lockdowns due to Covid-19 sent oil prices crashing to historic lows, allowing traders with ample storage, including floating storage and underground caverns, to capitalize.

Vitol has yet to close its 2020 accounts, and the final profit figure may still change if, for instance, the company decides to use some of last year’s earnings for writedowns, thus lowering the final net income figure. Still, the company is expected to report a net income of ~$3B for FY 2020, considerably higher than the FY 2019 figure of $2.3B.

Vitol’s independent trading peer Trafigura reported record profits of $1.6 billion for FY 2020, which ended in September, while Glencore Plc is also said to have had a bumper year.

But it’s not just independent traders who were laughing all the way to the bank as the majority of oil companies teetered on the brink of bankruptcy. In-house trading houses of public oil companies such as Royal Dutch Shell Plc (NYSE:RDS.A), BP Plc (NYSE:BP), and Equinor ASA (NYSE:EQNR) also proved their mettle in the game.

Shell doubled its crude and refined products trading profits in 2020, with earnings from the Oil Products division rising to nearly $2.6 billion from $1.3B the previous year. Shell managed to stay in the black despite an 87% plunge in profits thanks to the juicy trading profits.

Meanwhile, BP’s trading arm made nearly $4 billion in 2020, almost equalling the record trading profit in 2019. The profits were able to provide some support to the company’s full-year results, with BP reporting a net loss of $5.7 billion, excluding writedowns.

Equinor has reported a surprise adjusted net income of $646M for the second quarter, trouncing Wall Street’s expectations for a loss of $250M thanks to huge trading profits despite a 53 percent plunge in revenue to $8.04B.

Equinor’s marketing division delivered record-high results, with Q2 adjusted earnings for the company’s marketing, midstream and processing division clocking in at $696M vs. just $74M a year ago.

Equinor’s impressive quarter can be squarely chalked up to the perfect execution of the so-called contango oil plays.

When oil prices tanked in April, the price difference between a Brent contract for six-month forward contract and one for immediate delivery– a key measure of the degree of contango–plunged to a record of nearly -$14 a barrel, surpassing the last major contango witnessed during the 2008-09 financial crisis.

Equinor pounced on the opportunity and started storing millions of barrels of the commodity; filling its oil tankers with crude, turning them into floating storage facilities and renting onshore storage elsewhere. The company did this in anticipation that it would be able to flip its oil inventory at a profit when prices later recovered in the famous contango play.

And recover they did.

After averaging a multi-year low of $18.38/barrel in April, Brent prices have staged a significant recovery, averaging $29.38 in May and later crossing and holding above the $40/barrel mark in late June. Equinor took advantage of the oil price bounce to sell its inventories which, combined with other oil trading activity, helped deliver a record of about $1.16 billion in pre-tax adjusted earnings in just a single quarter.

“The increase was mainly due to the contango market during the quarter and good results from liquids trading,” the company said during its Q2 2020 earning report.

Obviously, a key component of a successful contango play is access to ample storage. Luckily, Equinor is well endowed in that department, with its Mongstad, Eldar Saetre underground caverns capable of holding nearly 9.5 million barrels. The company also said it had rented storage capacity in Korea for years and also used floating storage extensively.

Unfortunately, lack of storage space is the key reason why prices dipped into negative territory in April–and the reason why many other traders will continue being locked out of the juicy contango profits.