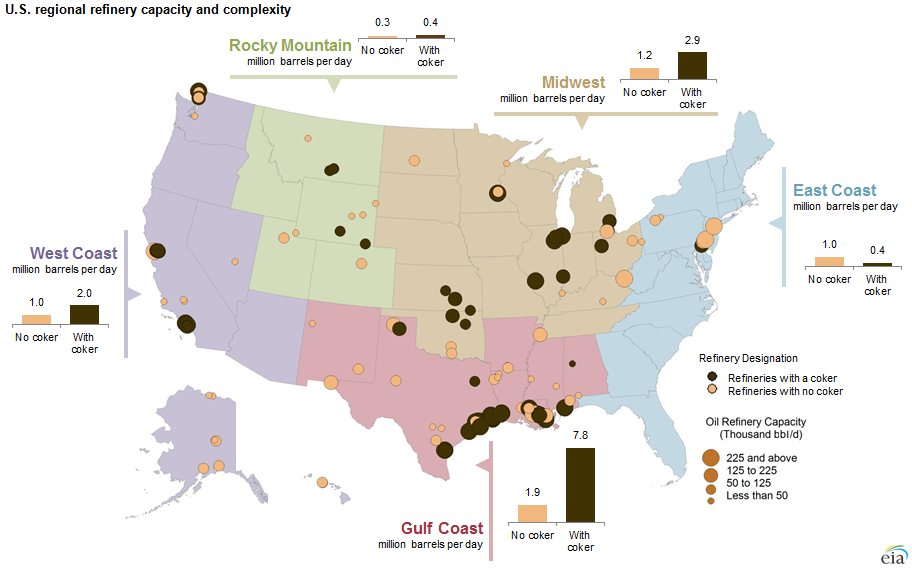 According to EIA analysis, planned refinery outages during the second quarter of 2021 are unlikely to cause a significant shortfall in the supply of petroleum products in the United States, particularly in transportation fuels including gasoline, jet fuel, and distillate fuel.

Despite the severe winter storm in mid-February and related unplanned outages in the Midwest and Gulf Coast regions, adequate inventory levels and lower-than-average demand will enable refineries to meet supply requirements despite planned outages for maintenance in the second quarter of 2021.

Planned outages in the Gulf Coast region for the second quarter of 2021 are less than 5% of the region’s capacity. A refinery’s capacity refers to the maximum amount of crude oil designed to flow into the distillation unit of a refinery, also known as the atmospheric crude oil distillation unit (ACDU). The region’s total petroleum product inventory is currently higher than the previous 10-year (2011–2020) average and will likely be sufficient to offset the lost production from planned outages.

The Gulf Coast region contains more than half of U.S. refining capacity, and as a result, the region produces far more petroleum products than it consumes. The region’s surplus production supplies other U.S. regions, notably the East Coast and the Midwest, as well as international markets.

Although inventories are lower than average and planned outages for maintenance are higher than average, we do not expect inadequate supplies of gasoline, distillate, or jet fuel during the second quarter of 2021 in the Midwest, absent an unanticipated event that limits petroleum supply operations.

Planned outages in the Midwest for the second quarter of 2021 are near or higher than the 10-year average. Regional petroleum product inventories are also lower than average. The Midwest accounts for 22% of the nation’s refining capacity and 29% of total U.S. demand for petroleum products. As a result, Midwest refineries produce most of the gasoline and distillate fuel consumed in the region, but the region also receives supplies from the Gulf Coast.