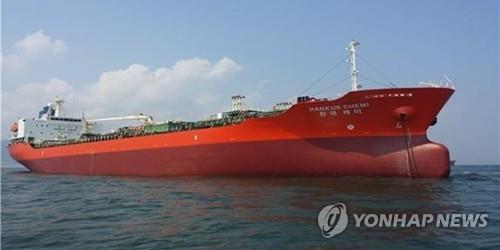 SEOUL, April 2 (Yonhap) -- Iran is likely to release a seized South Korean oil tanker and its captain as early as next week, a diplomatic source said Friday, noting "considerable progress" in the negotiations to end nearly three months of the seizure.

In early January, Iran's Islamic Revolution Guards Corps seized the vessel, MT Hankuk Chemi, and its 20-member crew over alleged oil pollution. In February, the Iranian authorities agreed to set free all sailors except for the captain for the ship's management.

"I understand that there has been considerable progress in negotiations with Iran over the seizure issue," the source told Yonhap News Agency on condition of anonymity. "MT Hankuk Kemi and its captain are likely to be released in the near future."

At the time of the seizure, the vessel was carrying 20 crewmembers -- 11 Myanmarese, five Koreans, two Indonesians and two Vietnamese.

Of them, only the South Korean captain remains in custody while the others are still in Iran for the maintenance of the vessel or have left the country.

It remains unknown why Iran agreed to release the ship and its captain, but speculation has emerged that Seoul and Tehran might have made headway in addressing the Middle Eastern country's call to unlock its funds -- worth US$7 billion -- frozen in Korea under U.S. sanctions.

The two countries have been consulting over how to release part of Iran's funds through a Swiss humanitarian trade arrangement designed to facilitate the flow of humanitarian goods to the Iranians.

Speculation has persisted that the seizure is linked to Iran's anger over the frozen funds. Tehran denies the speculation, stressing that it was purely a technical issue.
Posted by Crude Oil Daily at 1:03 PM