While OPEC+ Fights, Mexico Wins Over $2 Billion With Oil Hedge 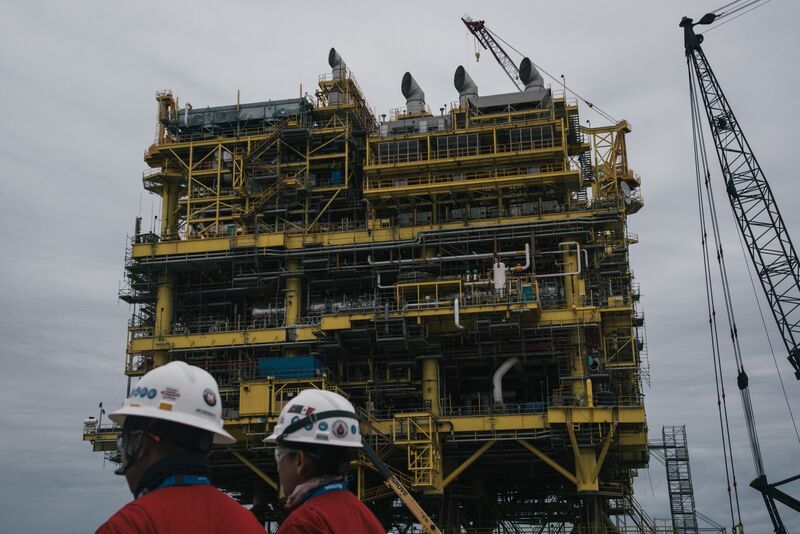 An oil platform being built in Mexico in 2018.Photographer: Luis Antonio Rojas/Bloomberg

Mexico will cash in its oil price insurance policy this year for the fourth time only in the last two decades, receiving a payout of about $2.5 billion from its 2020 sovereign oil hedge, people familiar with the transaction said.

In an ironic turn of events, Mexico is making a hedging profit just as the OPEC+ deal the Latin American country walked away from earlier this year is threatened by infighting over production levels.

For the past two decades, Mexico has locked in its oil revenue via options contracts it buys from a small group of investment banks and oil companies in what’s considered Wall Street’s largest -- and most closely guarded -- annual oil deal. The program gave President Andres Manuel Lopez Obrador leverage to abandon the OPEC+ agreement by shielding the country from oil market turmoil, and the payout comes at a time when his government is badly in need of cash.

This year’s hedge expired earlier this week, as the program runs annually from Dec. 1 to Nov. 30, triggering the payment mechanism. The government hasn’t yet disclosed the amount, but it released some financial data earlier this year that allows analysts to make an approximate calculation.

Mexico told lawmakers earlier this year it had guaranteed its budget oil price assumption of $49 a barrel for 2020 through a mix of its oil hedge and the use of a budget revenue stabilization fund. Traditionally, the stabilization fund covers a couple of dollars of the price, with the rest hedged via a massive derivatives deal with several Wall Street banks. Assuming that Mexico hedged around $45-$47 a barrel, and that it secured a similar volume as in previous years, it stands to receive a payout in excess of $2 billion.

A spokesperson at the Mexican finance ministry said they couldn’t comment at this time. The people who said the hedge would pay around $2.5 billion asked not to be named because the information isn’t public.

The payout is smaller than the $6 billion that Lopez Obrador said in April the country could make if oil prices remained as weak as they were then. The Mexican oil benchmark basket averaged just $12 a barrel in April during the darker days of the coronavirus pandemic. Since then, it has recovered to trade above $40 a barrel last week.

“We protected the Ministry of Finance,” Lopez Obrador said in April.

The smaller payout will still be a much needed cash injection after the nation’s budget revenue fell amid the deepest economic recession in almost a century.

Mexico counterparts on the deal have included in the past banks such as Goldman Sachs Group Inc. and JPMorgan Chase & Co., as well as the in-house trading units of big oil companies like Royal Dutch Shell Plc and BP Plc.

The hedge has shielded Mexico in every downturn over the last 20 years: The country made $5.1 billion when prices crashed in 2009 during the global financial crisis, and it received $6.4 billion in 2015, plus another $2.7 billion in 2016 after Saudi Arabia waged a price war.

The put options give Mexico the right to sell its oil at a predetermined price. The country banks all gains from a rally but enjoys the security of a minimum floor.

Although Mexico disclosed details of its hedge in the past, since 2018 it has kept secret the most sensitive data, including the exact strike price of the put options, and the volume hedged. On top of its sovereign program, which is run by the country’s Ministry of Finance and executed by the central bank, the state-owned oil company Petroleos Mexicanos also runs a much smaller oil hedge.