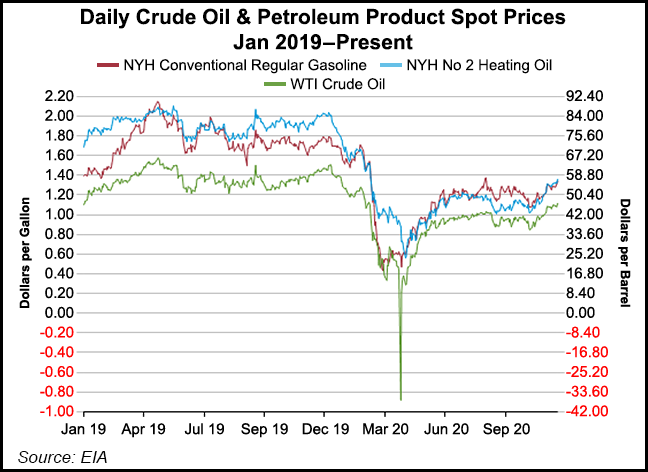 EIA said in its Weekly Petroleum Status Report that U.S. commercial crude oil inventories — excluding those in the Strategic Petroleum Reserve — decreased by 3.1 million bbl from the prior week. A week earlier, stockpiles increased by nearly 15.2 million bbl amid robust imports and after light post-Thanksgiving holiday demand, lifting crude storage to its highest level since August.

The latest result “was a nice walk down from last week’s supersized” build, said Robert Yawger, director of energy futures at Mizuho Securities USA LLC. The prior week increase “threatened to overwhelm storage in a relatively short time span. This week’s report has reduced those concerns.”

Despite a draw in the latest covered week, U.S. inventory of 500.1 million bbl is still about 10% above the five-year average for this time of year, EIA said.

Demand, meanwhile, increased 4% week/week for the latest covered period, EIA said, but it remained weak relative to pre-pandemic levels in 2019. Demand has been choppy on a week-to-week basis but, aside from an occasional exception, it has been consistently below year-earlier levels in recent months.

With the pandemic intensifying during November and December across the United States, analysts at Raymond James & Associates said Wednesday demand headwinds are “not going away anytime soon.”

Earlier this week, both the International Energy Agency (IEA) and the Organization of the Petroleum Exporting Countries (OPEC) updated their global oil demand forecasts to reflect the adverse impacts of the ongoing pandemic.

Pointing to travel restrictions imposed to slow coronavirus outbreaks, IEA said demand for jet fuel and gasoline in both Europe and the United States remain weak. The Paris-based watchdog said 2020 oil demand would fall 8.8 million b/d when compared to 2019, to 91.2 million b/d. That was 50,000 b/d lower than its November forecast.

OPEC expects oil demand to decline by 9.77 million b/d to 89.99 million b/d this year, down slightly from a previous outlook.

IEA and OPEC researchers said coronavirus vaccines that health officials began to roll out this week in the United States – and earlier in Europe – are expected to eventually help bring an end to the pandemic and pave a path for increased travel and fuel needs.

Both organizations, however, also emphasized it will take several months to inoculate enough people to substantially lower infection risks and normalize travel conditions. In the meantime, demand for both gasoline and jet fuel is likely to remain light through the winter months.