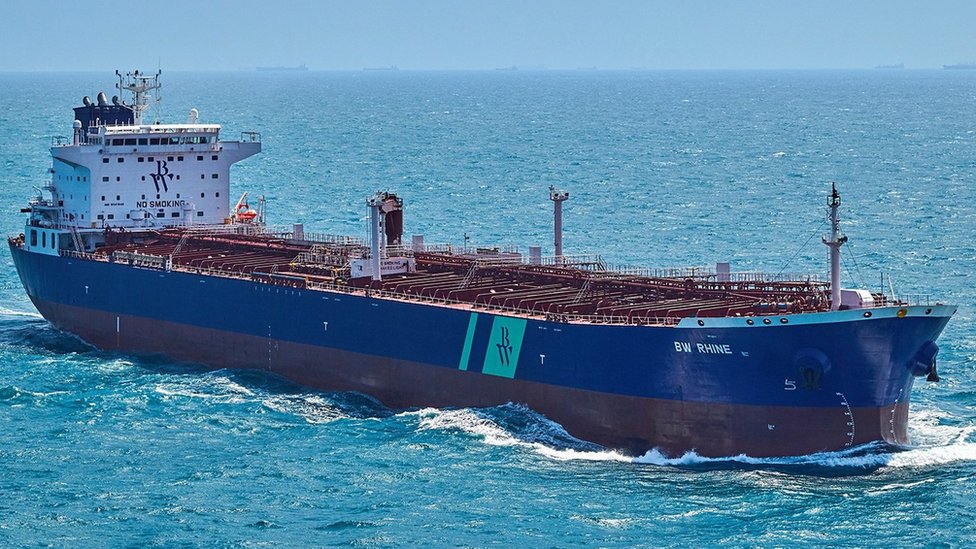 Saudi Arabia says an oil tanker was attacked by an explosive-laden boat while it was anchored at Jeddah's port.

The overnight attack at the facility's fuel terminal resulted in a small fire on board that was extinguished, the energy ministry told state media.

The owner of a Singapore-flagged tanker, BW Rhine, earlier said that it had been "hit from an external source", causing a blast that damaged its hull.

The energy ministry did not say who it suspected was responsible.

But the incident comes weeks after what Saudi authorities previously alleged were attacks by Yemen's rebel Houthi movement on a Maltese-flagged tanker and two Saudi oil facilities.

On Monday, tanker company Hafnia reported that the BW Rhine had been "hit from an external source whilst discharging at Jeddah" at about 00:40 local time (21:40 GMT on Sunday), "causing an explosion and subsequent fire".

The 22-strong crew extinguished the fire with assistance from the shore fire brigade and tug boats, a statement said. No-one was injured, but a water ballast tank and a cargo tank on the port side were damaged.

"It is possible that some oil has escaped from the vessel, but this has not been confirmed and instrumentation currently indicates that oil levels on board are at the same level as before the incident," the statement added.

The United Kingdom Maritime Trade Operations (UKMTO) naval authority said an unnamed tanker had experienced an explosion in Jeddah, and that there were also unconfirmed reports that a second vessel was involved.

Saudi authorities did not confirm the incident until Monday afternoon when an energy ministry spokesman spoke to state media.

There was no damage caused to the unloading facilities, nor any effect on supplies, the Saudi Press Agency reported.

The spokesman also warned that "these acts of terrorism and vandalism, directed against vital installations, go beyond the kingdom and its vital facilities, to the security and stability of energy supplies to the world and the global economy".

There was no immediate comment from the Houthis. A Saudi-led military coalition fighting in Yemen's civil war has blamed them for the three attacks listed by the energy ministry.

A fire broke out at the Jizan fuel terminal on 12 November after the coalition reportedly intercepted and destroyed two explosives-laden boats launched from Yemen's Hudaydah province.

On 25 November, an explosion damaged the Maltese-flagged oil tanker Agrari near Shuqaiq. A British security firm attributed the blast to a mine, but the Saudi-led coalition said a bomb-laden boat was launched towards the tanker.

The Houthis did not comment on either incident but did say they had fired a cruise missile at a Saudi Aramco oil facility in Jeddah on 23 November. The Saudi energy ministry said a projectile struck a fuel tank at a petroleum distribution station and ignited a fire.