The natural gas market appears to have lost a sense of scale for storage volumes. Prices languish while last week’s EIA figure for gas in storage at the end of injection season, normalized to supply, represents the second lowest on record even as gas demand is poised for a last major surge.

From 1975 until 2008, annual dry natural gas production varied oscillated flatly from 44 to 55 Bcf/d for over thirty years before beginning a quiet explosion. By contrast, 2019 will average in the low 90s after growing at a break-neck 11% in 2018 and continuing to grow through this year. This new reality of supply and demand changes the significance of the nearly unchanged gas storage capacity.

Storage, of course, buffers seasonal temperatures, and seasonal use has grown only marginally in the last ten years. Storage, however, also buffers the much larger industrial and export demand. That buffer, for both the impending winter and for the near-term growth in exports, now stands at the second lowest on record for the season.

The chart below shows the complete 25 years of weekly storage data available from the EIA normalized to production. Until the last few years, injection season commonly concluded with about 60 days of supply in reserves as shown in gray. The normalized buffer sagged from 2014 to 2017 (orange), but last year (red) marked the low point of a nearly three-year shortage. After those years of chronic depletion of storage, prices responded over $4, and rig count ascended briefly to peak in January of this year at 202. Prices ebbed, and rig count followed closely with the best plays laying down rigs from early March. Given the four to six months of delay common for horizontal wells, the last of the resulting bonus supply has already arrived. Related: The Race To Develop A 50 Billion Barrel Oilfield 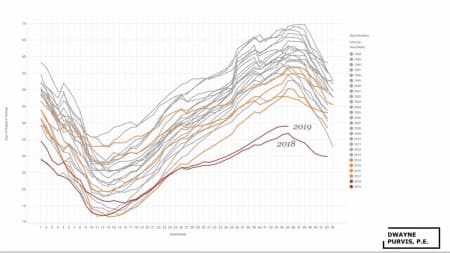 Moreover, the so-called “first wave” of LNG exports should have more than doubled U.S. exports during 2019, mostly during the injection season. But four of the five projects—Cameron, Corpus, Freeport, and Elba Island--started late. Unmaterialized demand sent available natural gas production into storage fields instead of cargo holds, topping off one of the largest storage injections recorded.

These new export volumes did not disappear, though; they only delayed. In the latest data available, exports had not yet reached 5 Bcf/d in June, though the full build-out will reach over 9 Bcf/d. Together with a few Bcf/d of planned industrial expansions, these exports will wrap up a decade of rapid growth with one final multi-BCF push beginning during this withdrawal season and ending by about the middle of next year. Related: Is Big Oil Wasting Its Time in The US Shale Patch?

Notwithstanding the excess injection over the summer due to unrealized demand and a burst of drilling, the storage season ended last week with only about 39 days of supply. In fact, normalized storage stands now at the beginning of withdrawal season lower than three previous years (2016, 2012, 2006) at the end of storage season.

Gas rig count has now fallen 35% from last January to stand at 129, and the laying-down has accelerated in the last two months. Meanwhile, the steep initial declines of shale wells mean that each month the industry must bring on about 2.8 Bcf/d of new (wet) gas supply just to maintain current production. By comparison, the Barnett Shale peaked at 5.2 Bcf/d, and Range Resources produces 2.2 Bcf/d.

Major export and industrial projects guarantee demand growth. Six months of declining drilling have locked in supply contraction, and the storage buffer lies near its all time low. Since neither Permian flaring nor drilled-uncompleted wells wait below the stage as deus ex machina, supply and demand are left to play out the drama on their own.

By Dwayne Purvis for Oilprice.com
Posted by Crude Oil Daily at 11:07 AM