Falling oil prices may be misreading a tenuous situation in Iraq 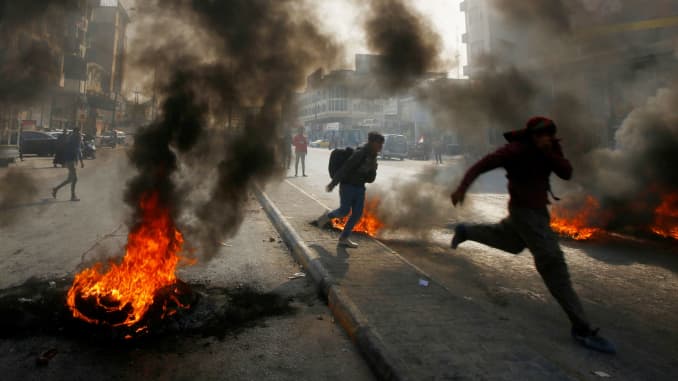 The resignation of Iraq’s prime minister helped trigger a drop in oil prices, but analysts say that may not be the right response by investors, as Iraq’s future may have just become even more uncertain.

Iraq is the second-largest oil producer in OPEC, with output nearing 5 million barrels a day, and analysts had said that anti-government protests in the country could ultimately impact oil exports if they continued.

Prime Minister Adel Abdul-Mahdi announced his resignation Friday after the country’s top cleric criticized the government following a deadly day of protests. Ayatollah Ali al-Sistani urged Iraq’s Parliament to stop the country from “sliding into chaos, violence and destruction,” according to news reports.

Oil fell in U.S. trading after the development but was also impacted by negative sentiment around trade talks and OPEC.

“It’s falling because the protesters got what they wanted,” said John Kilduff, partner with Again Capital. He said investors may now think the potential for disruption of Iraq oil exports has abated.

“Let’s see how the market reacts to this development. Scores were killed over the weekend,” he said.

Helima Croft, head of global commodities strategy at RBC, said the situation in Iraq now risks getting worse. “I think this is maybe far from over,” she said. “They are trading on a headline because they believe the Middle East is becoming more tranquil, not realizing that the battle for the future of Iraq is entering a more dangerous phase potentially.”

Protesters have focused on Iran’s influence in the country, which has water shortages, power outages and a high level of unemployment.

“There’s a sense the oil dividend is not being used to produce any economic dividend,” Croft said.

Croft said Abdul-Mahdi was expendable because he was not tied to any party, and the question now is when will elections take place.

“He was a consensus pick. What has to be a concern to Iran is that these Shiite protesters in Iraq have turned their rage on Iran,” said Croft.

Kilduff said the protests are another challenge to Iran in the region, at a time when its regime is also being challenged by violent protests in its own country. “That’s a key development, that the ire of the protesters is directed toward Iran,” he said.

As oil was being hit hard Friday, the outlook for the trade dispute between the U.S. and China looked more uncertain. The talks are expected to continue, but the potential for a deal became murkier after President Donald Trump signed a bill supporting protesters Wednesday, and Beijing responded negatively in return.

There are also doubts surfacing about OPEC’s meeting next week, with Russia potentially seeking to have its condensates exempted from the production quotas. News reports quoted unnamed sources saying Saudi Arabia does not want to shoulder a bigger percentage of the cuts.

“The OPEC meeting is looking more bearish by the day,” Kilduff said, noting that oil was also moving on technical factors. “The meeting looks like it might be going off the rails.” West Texas Intermediate futures slid just under the 50-day moving average at $55.62 per barrel.

Iraq is now the fourth government to fall, following Lebanon, Algeria and Sudan.

“Oil’s a totally broken barometer. The fact we’ve had multiple governments falling in the region does not mean the region is becoming more placid,” Croft said.
Posted by Crude Oil Daily at 3:08 PM