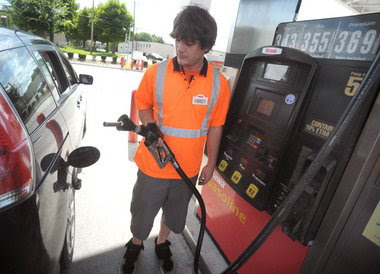 WASHINGTON, D.C. -- U.S. gas prices are nearly a dollar lower than they were a year ago and have been running below their 2014 peak since last spring. But what is the effect of the increase in disposable income on Americans? And where is that money going?

A majority of Americans, 57%, say lower gas prices are making a noticeable difference in their household finances, including 27% who say they are making a "big difference."

Americans Say They Are Paying Down Bills With Gas Savings

When asked what they are doing with the money they are saving because of lower gas prices, 42% say they are "paying down bills," as opposed to "spending it" (24%) or "saving it" (28%). This suggests that the extra money in Americans' pockets is not bolstering the economy as some predicted in 2014. 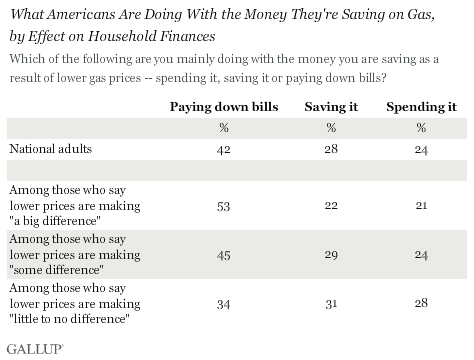 While paying down bills could technically be considered a form of spending, it is not spending that generally helps the economy because it covers previous purchases that were already recorded in the nation's gross domestic product. With spending across the U.S. sluggish in the early months of 2015, it is possible that lower gas prices are not contributing to greater spending or GDP growth.

Paying down bills is the most common way consumers are using the money they are saving on gas, regardless of whether they say the savings make "a big difference," "some difference" or "little to no difference" to them financially. Among those who say savings from lower gas prices are making a big difference, a majority (53%) say they are using the extra money to pay down bills, greater than the overall average nationwide. However, using this extra money to pay bills diminishes with lessening financial effect, as those who say lower gas prices have made little to no difference are the least likely to say they are using the extra cash to pay down bills.

As gas prices remain below $3 per gallon nationwide, with analysts saying that prices will stay that way for the foreseeable future, many Americans have more money to spend. With GDP growth in negative territory in the first quarter of 2015, the money Americans are not spending on gas isn't necessarily being spent on goods and services, which would bolster the economy. It is possible that people are buying more gas, however, as driving is up from last year, according to researchers at New York brokerage Convergex.

Americans using their newfound savings on gas to pay down bills is not unexpected, as that seems to be their normal inclination when they get extra money. For example, when President George W. Bush spearheaded a rebate for U.S. taxpayers in 2001, more Americans then said they planned to pay bills than opted for saving or spending. Some forecasters have said that the drop in oil has stabilized, so it is also conceivable that Americans may enter a "new normal" of expecting more disposable income and that it may not seem like extra money in time after all.

Results for this Gallup poll are based on telephone interviews conducted June 2-7, 2015, on the Gallup U.S. Daily survey, with a random sample of 1,527 adults, aged 18 and older, living in all 50 U.S. states and the District of Columbia. For results based on the total sample of national adults, the margin of sampling error is ±3 percentage points at the 95% confidence level.

Learn more about how the Gallup U.S. Daily works
Posted by Crude Oil Daily at 12:27 PM