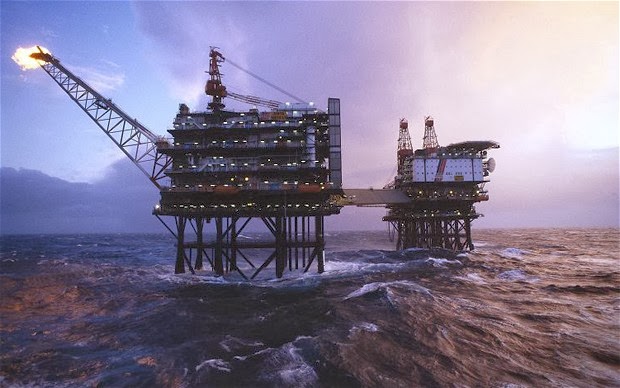 Britain's oil production from the North Sea is expected to fall this year to new lows not seen since the early 1970s in a fresh blow to Alex Salmond's economic plans for Scottish independence.
In its latest closely watched market report published Wednesday, the Organisation of Petroleum Exporting Countries (Opec) said that projected output from the North Sea in 2014 could fall to an average of 800,000 barrels a day (b/d) of crude, a fall of 70,000 b/d from 2013 when output hit its lowest average since 1977.
"UK oil production has fallen from a peak of close to 2.82m b/d in 1999, when the country’s net exports were 972,000 b/d. Until recently, the UK’s mature North Sea fields have seen decline rates averaging around 6pc a year. However, oil output slumped by more than 17pc in 2011 and 14pc in 2012 to less than 1m b/d, exacerbated by heavy maintenance and unplanned outages," said OPEC in the 107-page document.
OPEC's poor assessment for the prospects of North Sea production will come as a further blow to Mr Salmond who has argued that exploiting oil resources will be enough to sustain Scotland's economy if he is successful in September's referendum. According to Mr Salmond's figures, the region's remaining oil reserves will be worth £300,000 per person.
In an exclusive interview with The Telegraph in October, Opec Secretary General Abdalla Salem el-Badri warned that North Sea "oilfields" were depleted and that an independent Scotland would be unthinkable.
A drop in forecast oil production from the North Sea also also comes a day after it emerged that George Osborne, the Chancellor, is set to rule out a currency union with an independent Scotland.
Seperately, OPEC has forecast stronger global oil demand this year as economic growth picks up boosting demand for energy. The group of 12 major oil producers said on Wednesday that demand will rise by 1.09m barrels a day in 2014, an increase of 45,000 b/d on its previous forecasts bringing total world consumption to 90.98m b/d of crude.
Established in 1960, the Vienna-based Organisation of Petroleum Exporting Countries sets the tone for world oil markets by deciding how much crude to pump into the system. Its decision to raise its forecasts for oil demand will once again raise concern that investment in new production will again fall behind consumption forcing oil prices higher.
Posted by Crude Oil Daily at 12:57 PM