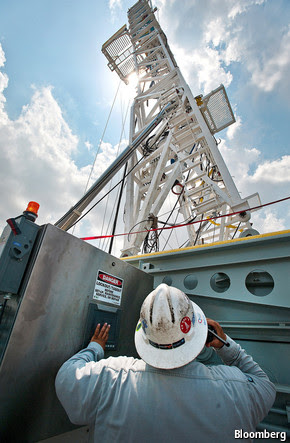 
SEEN one way, economic recovery in Europe and America is good for the Organisation of the Petroleum Exporting Countries (OPEC). Oil stocks in industrialised countries are at their lowest for five years; the latest monthly report from the International Energy Agency (IEA), a club of oil-consuming countries, anxiously urges producers to keep pumping to replenish them.
But the longer-term future for OPEC, which produces about a third of the world’s daily consumption of 90m barrels of crude oil, is another matter. Often described as a cartel, it is better seen as an anti-glut group. When demand is weak, its members can curb production to prevent the price plummeting. But when demand is healthy, its ability to curb new producers is limited. And new producers abound. 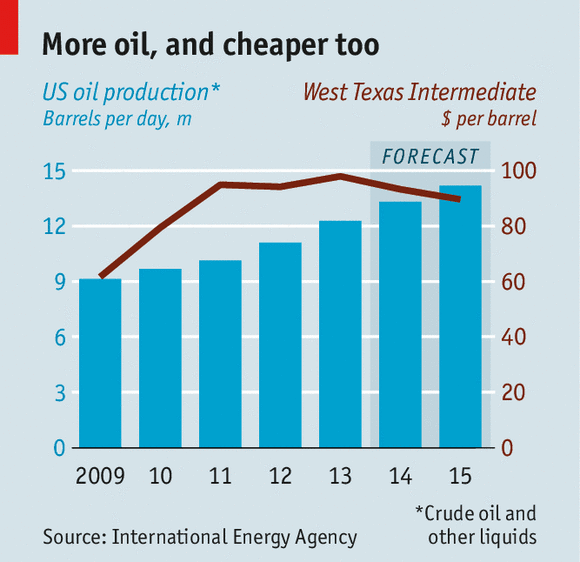 Too useful to export, for now

America’s domestic production of crude (and gas, which displaces some oil) is rocketing. The IEA says the country will produce 14m barrels a day (b/d) next year, on a par with Saudi Arabia (see chart). That has reduced America’s imports, as well as boosting exports of fuels (exports of crude oil are mostly banned). That frees crude from other places, such as West Africa, to go to Europe instead. Similarly, Latin American and Middle Eastern oil that once would have gone to America now goes to Asian customers.
For the oil-rich, even worse is in store. Other factors that have propped up the price over the past decade are likely to wane in importance. Even the slightest easing of sanctions helps Iran, potentially a huge producer. It increased its exports by 100,000 b/d in January—the third consecutive monthly rise. Iraqi oil exports, stricken by the war and its aftermath, are also set to increase. The Economist Intelligence Unit (our sister company) forecasts a “significant boost” in 2014 from 2.4m b/d last year. This assumes new investment pays off, and a deal with the semi-autonomous Kurdish region. Libya could be another source of production: its exports have collapsed to only a few hundred thousand barrels a day, against 1.6m in June last year.
These downward pressures on the oil price present OPEC with a tricky decision. Its natural response would be to cut production from the current target of 30m b/d to support prices near the level of recent years, of around $100 a barrel. But OPEC’s record of enforcing quotas on its 12 members is patchy. Another option would be for Saudi Arabia and its Gulf allies, the group’s biggest producers, to cut production unilaterally. But that would cede market share to their hated rivals, Iran and Iraq. An alternative would be to increase production sharply. That would send the price down: painful for the kingdom, but even more painful for higher-cost producers (not least America, where the “tight oil” now coming on stream requires prices of $50 and above to be profitable).
OPEC’s best hope is continued American protectionism. Any easing of the restrictions on the export of liquefied natural gas (LNG) or crude will exert more downward pressure on the oil price. That might be good for the world economy, but it is not a priority for American consumers, who would like cheaper petrol for cars and propane for heating, especially during cold snaps like the recent one. “Chickens are dying,” noted an American speaker at an event put on by Argus Media, an energy-information group, during the International Petroleum Week in London. “Farmers are asking, ‘Why are we exporting propane when we could be burning it here?’”
From the print edition: Finance and economics
Posted by Crude Oil Daily at 11:49 AM