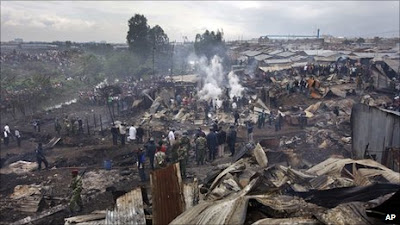 A petrol pipeline explosion has killed more than 100 people in Nairobi, Kenya, after locals scrambled for free fuel when the pipeline began leaking.


The oil pipeline, which runs through the Sinai slum region situated between the city centre and the airport, ignited after a cigarette butt was thrown into an open sewer where the oil was collecting, reports have suggested.


Bodies were scattered up to 300m away from the blast area and some nearby shacks were burned to the ground in the blaze.


According to BBC reports, bodies were also seen floating in a nearby river after those burned tried to douse themselves after catching on fire.
Posted by Crude Oil Daily at 10:02 AM