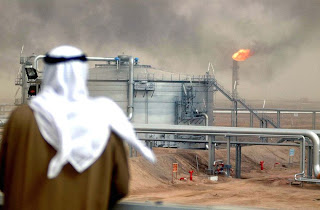 By Joshua Schneyer and Amena Bakr

NEW YORK/ABU DHABI (Reuters) - Saudi Arabia's plans to expand its drilling rig count by 28 percent signal a rush to deliver the 12.5 million barrels a day (bpd) of capacity that Riyadh has long claimed is in place.

Two Saudi officials told Reuters on Tuesday that the extra rig activity would maintain rather than increase the kingdom's oil capacity. It completed a multi-year expansion in 2009 meant to boost spare capacity by more than 3 million barrels per day.

"It's not to expand capacity. It's to sustain current capacity on new fields and old fields that have been bottled up," one of the officials said.

State-run oil giant Saudi Aramco met leading oil service companies including Halliburton (HAL.N) over the weekend to discuss plans to boost the country's rig count this year and next to 118, from around 92 now, Simmons & Co analyst Bill Herbert said on Monday.

Saudi Arabia increased its output to around 9 million bpd this month to help compensate for disruption of supply from fellow OPEC producer Libya.

Higher oil prices set off by recent political unrest in the Middle East and surging demand for crude in the developing world are spurring increased activity in the Saudi oil patch.

Brent crude traded above $115 a barrel on Tuesday and has risen 22 percent this year.

"The market has provided the Saudis with confirmation of the fact that the risk premium is here to stay, implying elevated crude prices," said strategist Shelley Goldberg of Roubini Global Economics.

"The Saudis, and others, are likely to throw money at this growing problem to placate the doomsaying and oil supply shock vigilantes."

In theory, Saudi Arabia possesses a 3.5-million-bpd cushion to protect against any further supply outages on the global market.

But many in the oil industry question how quickly and sustainably Riyadh could deliver that volume.

Other commentators have also doubted the extent of Saudi spare capacity and said it would be tested to the limit if protest movements across the Middle East caused further supply disruption.

Already violence in Libya has cut exports of about 1.2 million bpd on the 89 million bpd world market.

"The real risk is that the remaining spare capacity cannot accommodate an escalation in disruption right now in our view," Goldman Sachs wrote in a note dated March 7.

Goldman also said earlier that Libya's disruption could absorb as much as half of OPEC's spare capacity.

Much of Saudi Arabia's international influence has derived from a role often described as the oil world's equivalent of central banking.

As the holder of almost all the available spare production capacity, it can add supplies to oil markets in time of need.

The only other significant spare capacity, albeit in much smaller volumes, is controlled by Saudi Arabia's fellow Gulf states the United Arab Emirates and Kuwait.

Maintaining surplus capacity costs billions and some analysts have questioned whether Saudi Arabia would continue to invest, especially when the world's largest oil consumer the United States has repeatedly said it wants to wean itself off foreign oil.

Since then, Riyadh has said there was no need to increase its oil capacity and has shifted the focus to expanding its natural gas production, needed for domestic power needs.

"Plenty of people out there paint a doomsday scenario of Saudi capacity, but I don't buy that," said Sarah Emerson of Energy Security Analysis Inc in Boston.

"This doesn't sound like a scramble to me. They need to add more equipment as they go along and retrofit older equipment."

Simmons' Herbert said Saudi Arabia wanted the rig count to rise quickly in the second half of 2011 and the first half of next year.

It might use some of the rigs for a $16 billion Moneefa offshore heavy crude project, undertaken by state oil giant Saudi Aramco to compensate for declines at other fields.

Halliburton said late on Monday it would accelerate activity at Moneefa.

The company's shares rose 2.4 percent to $49.06 on the New York Stock Exchange on Tuesday after surging 4 percent on Monday. Shares in Schlumberger (SLB.N) have climbed 9.3 percent in two days, while Baker Hughes (BHI.N) is up 4.8 percent over the same period.