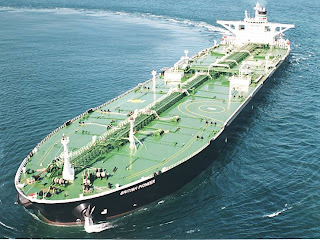 The uprising against Libyan ruler Muammar Qaddafi may boost supertanker earnings above 2010 levels as U.S. oil refineries are forced to increase imports from the Middle East, Arctic Securities ASA said.

Demand for very large crude carriers, or VLCCs, could rise as much as 6 percent as Europe takes a greater share of West African and Algerian oil, forcing U.S. refiners to import more from the Persian Gulf, Arctic head of equities Ivar Larsen wrote in an e-mailed report today. That would entail longer-distance deliveries that effectively cut vessel supply.

“Given that this effect could be there for a year, we could see a market that’s better than last year,” Larsen said by phone. Tanker earnings “could surprise on the upside,” according to the note.

Returns from supertankers on the industry’s benchmark Saudi Arabia-to-Japan route have been above what Frontline Ltd., the biggest operator, requires to make a profit on only 10 days this year, according to data from the company and the Baltic Exchange in London.

Libyan oil output has fallen to less than 400,000 barrels a day, about a quarter of production before the crisis, and may stop, Shokri Ghanem, chairman of Libya’s National Oil Corp., said on March 19. Italy’s Eni SpA (ENI), the biggest foreign oil company in Libya, evacuated the last of its expatriate staff after the United Nations authorized military action.

So far this year, rents on the Saudi Arabia-to-Japan route have been 66 percent below the corresponding period in 2010, declining 23 percent to $22,678 a day last week, according to the Baltic Exchange. Of the 24 analysts following Frontline, half recommend selling the company’s shares.

The Libya effect could lift overall VLCC utilization rates above 92 percent this year from about 90 percent in 2010, Larsen wrote.

To contact the editor responsible for this story: Claudia Carpenter at ccarpenter2@bloomberg.net
Posted by Crude Oil Daily at 2:16 PM