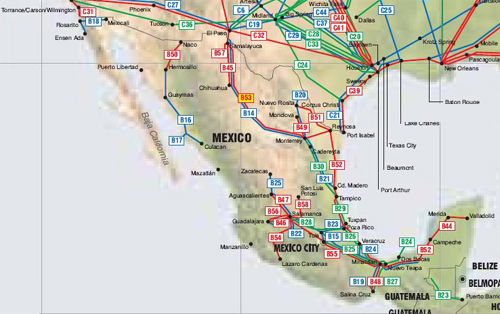 Mexico will present a set of infrastructure projects in the energy sector where private companies will be invited to participate, while it prepares to undo the energy reform conducted by the previous administration.

Mexico will announce a set of infrastructure projects before Sept. 15, when Mexicans celebrate Independence Day, President Andres Manuel Lopez Obrador said Sept. 7. The joint plan between the government and the private industry to reactivate the economy had originally been announced in November.

According to a presentation filtered to the press, which presumably originated in the office of the presidency, the government’s announcement will consist of 168 projects worth roughly $44.4 billion where the private industry will provide over 50% of equity.

The announcement comes at a time when lawmakers from the president’s party prepare to discuss a series of changes to the constitution that would effectively undo the energy reform carried out by former President Enrique Pena, which opened up the sector to private investment after over seven decades of monopoly.

Senators from Morena, the party formed by the president and which currently has majority in both Houses of Congress, will discuss modifications to undo the 2013 energy reform, according to the party’s legislative agenda for the next period, which began on Sept. 1 ends in January. The plan includes changes to Mexico’s Hydrocarbon’s law, Pemex’s internal rules, the law of the energy regulators and the law for hydrocarbon revenues, the agenda shows.

The main goal of the modification is to strengthen Pemex and CFE, the state hydrocarbon and power companies, respectively, for them to become economic engines for the country, the president has repeatedly said.

The energy reform allowed private companies to participate in all areas of the energy sector for the first time in over 70 years and attracted over $200 billion in committed investments, including power generation and oil exploration.

Lopez Obrador has touted with the idea of modifying the constitution to undo the energy reform for many years and even used it as a presidential campaign promise. Yet since he took office in December 2018, he promised to wait until his third year in office to do so.

Sources have told Platts in recent months they see limits to the changes the current administration can make, because modifying many laws is a complex political process that needs coordination and therefore many of them expected the changes next year, after next year’s elections, which could add strength to the president’s party.

In July, Mexico will renovate the lower House of Congress as well as 13 out of the 32 governorships in the biggest election process in modern history.

Sources have also said undoing the reform is hard because many of the rules of the market are also included in the recently signed United States-Mexico-Canada Agreement.

Modifying the constitution to achieve something similar to what the president has mentioned is clearly against the treaty, said Rosanety Barrios, an independent consultant who helped implement the 2013 reform as public official.

“The goals of the administration would imply closing the market to private investments and even expropriations, which is against the treaty,” she said.

The Mexican energy sector and its investments are part of the USMCA and all the other trade treaties Mexico has signed, said Guillermo Zuñiga, a US-based consultant during a Sept. 8 webinar organized by Mexico Evalua, a Mexico-based think-tank, during the presentation of their recent report on Pemex and CFE.

However, many participants consider this administration does not need to change the law.

“The president has managed to dismantle the market without changing a coma in the constitution,” said Miriam Grunstein, founder partner at Mexico-based Brilliant Energy Consulting during a Sept. 7 webcast webinar on the future of the Mexican oil industry.

The government has cancelled oil rounds and long-term electricity auctions; it has stopped issuing new import permits for gasoline importers; it has issued new regulations to curb the participation of private power generators and has captured regulators to benefit Pemex and CFE, prompting international criticism.

At least three regulators have acted in ways that resulted in some sort of benefit in favor of Pemex or CFE in recent months, Mexico Evalua’s report shows.

Pemex and CFE representatives did not respond to requests for comment.

Among the 168 infrastructure projects the government could announce, there are 23 related to the energy sector, the filtered presentation shows. Sources said that if the presentation were real, the announcement would be disappointing as many of the projects have been on the table for years, at least on paper and only two of the projects have some advancement. Others think it is unlikely to be presented.