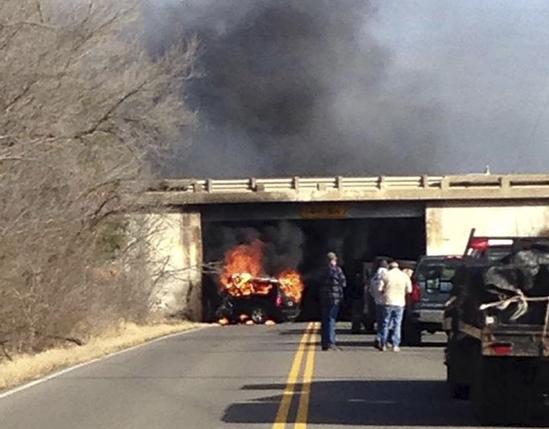 Former Chesapeake Energy Chief Executive Aubrey McClendon, a brash risk-taker who helped transform the U.S. energy industry with shale gas, died when his car slammed into an overpass on Wednesday, one day after being charged with breaking federal antitrust laws, police said. He was 56.

McClendon was alone in his 2013 Chevy Tahoe when it sped into an embankment along a remote two-lane road in Oklahoma City, where it burst into flames, a police spokesman said. The cause of death will be determined later by a medical examiner, the spokesman said.

The crash occurred less than 24 hours after the U.S. Department of Justice announced that McClendon had been indicted for allegedly colluding to rig bids for oil and gas acreage while he was at Chesapeake. He had denied the charges.

At a press briefing in Oklahoma City, Captain Paco Balderrama said McClendon was traveling at “well above” the 40 mile per hour speed limit before he "pretty much drove straight into the wall." He was not wearing a seat belt.

“There was plenty of opportunity for him to correct or get back on the roadway and that didn't occur," Balderrama said.

Industry executives and state officials remembered McClendon as a "visionary" who ushered in a new era of U.S. energy abundance by pursuing the hydraulic fracturing technology that would unlock decades' worth of domestic natural gas and oil resources.

Over more than two decades, he built Chesapeake from a small wildcatter into one of the world's biggest natural gas producers before resigning in 2013, after a corporate governance crisis and investor concerns over his heavy spending

It may take one to two weeks to complete an investigation into the accident, which occurred about 8 miles (13 km) from American Energy Partners, the company that McClendon founded shortly after leaving Chesapeake.
"Aubrey's tremendous leadership, vision and passion for the energy industry had an impact on the community, the country and the world. We are tremendously proud of his legacy," American Energy Partners said in a statement.

Tuesday's indictment followed a nearly four-year federal antitrust probe that began after a 2012 Reuters investigation found that Chesapeake had discussed with a rival how to suppress land lease prices in Michigan during a shale-drilling boom. Although the Michigan case was subsequently closed, investigators uncovered evidence of alleged bid-rigging in Oklahoma.

A native of Oklahoma, McClendon attended Duke University before starting Chesapeake in 1989 with his friend Tom Ward. Ward, who later broke away to launch his own company, SandRidge Energy Inc, called McClendon's death "not only a heartbreaking day for me but a sad day for all of Oklahoma."

McClendon was known for his high tolerance for risk and debt and for his lavish lifestyle, which included the purchase of high-end homes, antique boats and an extensive wine cellar.

On his watch, Chesapeake leased a fleet of planes that shuttled executives to oil and gas fields - and the McClendon family to far-off holiday destinations.

Closer to home, McClendon was revered for helping to bolster the Oklahoma economy and revitalize its biggest city, including landing its first major sports franchise, the Oklahoma City Thunder basketball team, in which he had a minority stake.

He was “a visionary who raised the profile of Oklahoma,” Governor Mary Fallin said.

McClendon was one of the foremost leaders of a U.S. energy boom that lifted output to the highest levels in years, reduced reliance on foreign oil and mobilized new pools of investment capital for wildcat drillers.

"I’ve known Aubrey McClendon for nearly 25 years. He was a major player in leading the stunning energy renaissance in America," Texas energy investor T. Boone Pickens said in a statement. "He was charismatic and a true American entrepreneur. No individual is without flaws, but his impact on American energy will be long-lasting.”

"Chesapeake is deeply saddened by the news that we have heard today and our thoughts and prayers are with the McClendon family during this difficult time,” the company said in a statement.

McClendon is survived by his wife, Katie, and their three children, Jack, Callie and Will.