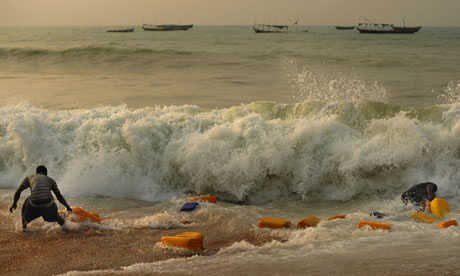 Contraband … jerry cans are used to smuggle fuel out of the Gulf of Guinea to Togo. Photograph: Daniel Hayduk
Pictures taken by the Canadian photographer Daniel Hayduk reveal an intriguing, but essential, aspect of the west African economy. Contraband fuel purchased legally in Nigeria, where subsidies keep prices much lower than in neighbouring countries, irrigates the economies of the whole region.
Every morning a flotilla of small boats approaches the Togolese coast, laden with Nigerian fuel. The jerry cans are thrown overboard and towed back to the beach by swimmers. The precious liquid is decanted for sale in the capital Lomé, but also in Ghana, Burkina Faso and even Mali. The beaches of neighbouring Benin are the scene of similar operations.

Smuggling has reached an unprecedented level with the boom in global oil prices since 2008. It is hard to provide firm estimates but it certainly seems essential to the economies of each state. In November 2011, Benin's finance minister acknowledged that more than three-quarters of the fuel consumed there was illegally imported from Nigeria. In Togo, population 6 million, a 250-litre barrel sells for $300, a small fortune in a country where about two-thirds of the population live in poverty. Some smugglers and local dignitaries have reaped generous rewards, and "micro-petro-states" have sprung up on either side of the border between Togo and Benin, where "local officials … are largely independent of national law and its enforcement", according to an article published in March by the website ThinkAfricaPress.

Despite the scale of the smuggling, the authorities have done little to stop it. Street vendors watch out for police raids, which are sometimes violent, but carry on selling the fuel in broad daylight. Corruption is not the only explanation. The racket is a serious problem for governments, but a source of work for many people, and a boon for all those who use the cheap fuel – the price is 15% to 30% less than in Togo's licensed filling stations. To stop such a flourishing trade is unthinkable in a country where the informal economy is predominant – accounting for more than 70% of jobs in sub-Saharan Africa, according to the International Labour Organisation. On the other hand, this illegal business entails a net loss for the already constrained budgets of these countries.

International agencies, particularly the International Monetary Fund, issue regular protests, pressing for prices to be harmonised across the region. Nigeria is under pressure to end its system of subsidies. A Nigerian parliamentary report, published in April, estimated the subsidies had cost the nation $17bn in 2011, much more than the $8bn announced by the government. So far attempts to raise prices have failed, with general strikes forcing the authorities to backtrack.

In January, yielding to popular outrage, President Goodluck Jonathan had to rescind his decision to raise the price of a litre of petrol from 60 cents to 85 cents. Most Nigerians see the subsidy as the only good thing about the oil industry, which has benefited an elite perceived as deeply corrupt.
• This article appeared previously in Le Monde
Posted by Crude Oil Daily at 11:18 AM