In North Dakota, hard to tell an oil millionaire from regular Joe 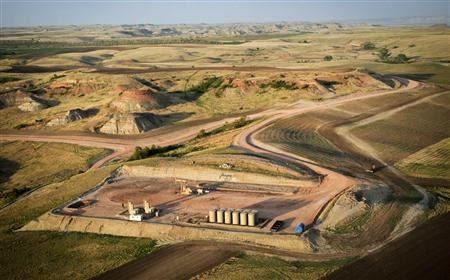 Reuters/Reuters - An aerial view of an oil well site near Watford City, North Dakota is seen in this picture taken May 17, 2012. Many North Dakota oil region residents receive $50,000 or $60,000 a month in …more oil royalties and some more than $100,000, said David Unkenholz, a senior trust officer at First International Bank & Trust in Watford City. Picture taken May 17, 2012. REUTERS/Ben Garvin less

http://news.yahoo.com/north-dakota-hard-tell-oil-millionaire-regular-joe-193713808.html
STANLEY, North Dakota (Reuters) - The retired men shooting the breeze at Joyce's Cafe in Stanley don't look like oil barons but appearances can be deceptive, especially in North Dakota.
Take Robert Western, a farmer who was dressed in rumpled overalls and a baseball cap as he sipped coffee and discussed the oil boom that has transformed this once sleepy town.
"Some of the younger people buy a lot more - machinery, vehicles, things like that," said the 75-year-old Western. "The rest of us, I guess it doesn't alter our lifestyle a great deal. I don't have a lot of needs."

After he left, his friend Earl Rogstad remarked to a visitor: "It's too bad Robert didn't have his airplane ready... He offered last summer to fly me over and see (the oil wells) from the air."

Western did not mention that he is co-owner of a Piper single engine propeller plane, according to FAA records. He did admit to receiving oil royalties from wells on his farm but locals said he is far from the richest man in town. It is not clear whether Western is a millionaire or merely wealthy.
"You can't tell the average Joe farmer from the average Joe millionaire," said Ward Heidbreder, Stanley city coordinator.


Average income in Mountrail County, the hub of the North Dakota oil production boom, roughly doubled in five years to $52,027 per person in 2010, ranking it in the richest 100 U.S. counties on that basis including New York City, and Marin, California.


The boom could be creating up to 2,000 millionaires a year in North Dakota, said Bruce Gjovig, founder of the Center for Innovation at the University of North Dakota.

Many oil region residents receive $50,000 or $60,000 a month in oil royalties and some more than $100,000, said David Unkenholz, a senior trust officer at First International Bank & Trust in Watford City, the seat of McKenzie County, which is the No. 2 oil producing county in the state behind Mountrail.

The oil is so plentiful that in Stanley, where the population has about doubled to 3,200 in the last five years, a well drilled under the town means that many homeowners could receive a small oil royalty check.

The monster homes, ostentatious diamond rings or luxury sports cars of California and New York are virtually nonexistent in North Dakota. Looking for wealth here is a subtle exercise.

"They are a lot more elaborate, a lot more loaded up than what they used to be, even the accessories," Evans said. "There is a big demand for accessorizing a pickup truck - everything from running boards to grill guards to chrome wheels."

Evans, 66, a part owner of the dealership since 1970 and manager of the services business, said most residents have not changed their buying habits, especially those over 50.

"Some of these people you could look at and you don't even know if they have an oil well or not, and they may have several," said Evans, who grew up on a family farm west of Stanley and also has some mineral acres.

One reason rich locals do not brag about their money is because some residents do not own precious mineral rights to the land and have missed out on the boom. Land and mineral rights can be separated and sold in North Dakota and often are.

Royalties are paid based on oil produced and sold mainly in sections of land of one or two square miles in size. The owner of the mineral rights receives the royalties. It can be a complex exercise to divide rights among multiple land heirs.

In simple terms, a well producing 100 barrels of oil per day sold at $80 a barrel would generate $248,000 in a 31-day month. The state collects taxes on extraction and production of about 11.5 percent. From there, if the rights holders have one-fifth royalties, they would receive $43,896 a month.

In July, North Dakota wells produced an average of 92 barrels per day but some produced more than 10,000 barrels in a month, a windfall for the royalty owners.

Some of that money has gone to area churches in the form of anonymous donations and some to the schools for technology, said Heidbreder, the city coordinator.

It's not just land owners who are benefiting from the boom. Oil has also brought high-paying jobs, and some of that money filters through to local businesses.

So-called man camps have sprung up in North Dakota, where oil workers live in makeshift dormitories.

At a man camp in Williston run by workforce housing provider Target Logistics, the 26 kitchen staff, all from outside the state, work 84 hours a week for six straight weeks, then take two weeks off, executive chef Jason Freeman said.


Target Logistics has several man camps in western North Dakota, including a hotel and cabins at Stanley, mainly for energy employees. Its camp in Williston, the largest area town, looks like a military base with room for about 800 workers, a huge cafeteria, weight room, lounge and other facilities.


"This is a thriving economy. This doesn't exist anywhere else," said Freeman, who lives in central Minnesota.


There are downsides to the oil rush. Crime reports are up in Stanley, even if not as much as the population. Aggravated assault reports rose 55 percent last year in the oil producing counties, according to state figures.


Gayleen Grote, who lives on a family farm north of Tioga in the oil patch, said she has a permit to carry a concealed weapon and sometimes puts a semiautomatic pistol in a bra holster.


"There is a lot of testosterone," said Grote, adding that though she has never had to get aggressive, male drivers have stopped several times while she was walking by herself on area roads. "There is nothing to do but drink," she said.