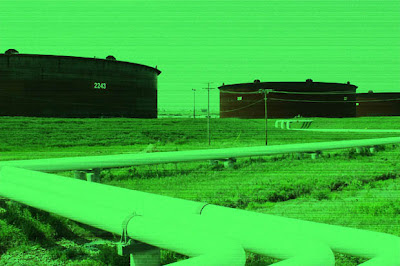 The bottleneck of crude stored in Cushing, Okla., has become the country’s “biggest bank vault of oil,” Businessweek’s Matthew Phillips writes. And it’s only getting bigger.

The clog — which is pushing down the price of West Texas Intermediate crude from Oklahoma, creating a gap with its international rival, Brent — is making traders rich.

Information is everything, and traders are using high-tech extremes to extract data about oil storage and flow from the high-security oil hub. Photographers in helicopters? That’s relatively low-level when it comes to these storage tank spy games, Businessweek reports:

Recently, photographers have started using infrared cameras to peer inside the tanks. The difference in heat can often show where the oil line is.

And that’s just the beginning.

A private “energy intelligence” company called Genscape is funding much of the high-tech surveillance, reports Businessweek, whose parent company — Bloomberg — also does their own Cushing surveillance by way of twice-weekly satellite flyovers.

Genscape also places electromagnetic monitors beneath the power lines running into the Cushing tank farms to measure their power usage. This gives them an idea of how much oil is being pumped into and out of Cushing.
Cushing is Key to Oklahoma’s Energy Industry and Economy
The data is gathered and sold to banks, hedge funds and oil traders. Oil companies and tank owners are responding with tall barbed-wire fences, arrays of surveillance cameras and armed guards.

The oil glut in Cushing has created “one of the biggest arbitrage opportunities in recent memory,” Businessweek reports:

Buy oil low in Cushing, and sell it high—just under the price of Brent—to refineries along the Gulf Coast.

But getting the oil out of Cushing and into Texas refineries is the hard part.

Pipelines are being built — and reconfigured — at a frenzied pace, and traders are increasingly turning to other “creative ways” to move cheap oil out of Cushing, Bloomberg reports:

… by any means necessary, using barges (…) fleets of commandeered trucks, and trains, where they can find them. The companies that can pull it off can expect to make money—a lot of it.
Posted by Crude Oil Daily at 11:13 AM