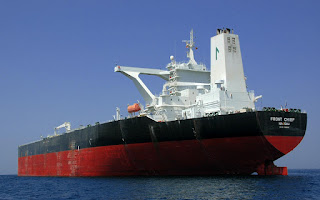 
(Bloomberg) -- Wilbur Ross, whose company manages about $10 billion of assets, said private-equity investors are increasingly interested in shipping after a four-year rout caused by a glut of capacity.
WL Ross & Co. was among investors who spent $900 million a year ago on 30 tankers hauling refined oil products. It became the largest shareholder last month of Navigator Holdings Ltd., which carries liquefied petroleum gas. Growth in developing economies will drive demand for shipping, Ross said in an interview at Bloomberg’s headquarters in New York on Sept. 10.
“For the first time, private equity is seriously interested in shipping,” he said. “Getting to numbers in the billions is not a stretch. It’s more a question of finding the right opportunity set that has a low-enough entry point.”
The combined market value of 145 shipping companies that are part of U.S. stock indexes tumbled at least 60 percent to $137 billion since May 2008, data compiled by Bloomberg show. Apollo Global Management LLC and Blackstone Group LP are among private-equity firms that bought vessels in the past two years. The industry’s investment in shipping jumped 13-fold to $3.3 billion last year, according to Marine Money International, a New York-based consultant and publisher.
Earnings for ships hauling crude oil, iron ore, coal and grains are mostly below what owners need to break even, according to figures from the Baltic Exchange in London, which publishes costs along more than 50 maritime routes. Owners are contending with fleets growing at least twice as fast as demand, based on data from London-based Clarkson Plc, the world’s largest shipbroker.
Fredriksen’s Billions


“It’s one of the most capital-intensive industries I know, and yet uniquely it’s highly fragmented,” Ross said. “It has not become oligopolistic, despite being inherently global and capital-intensive. We think that will begin to change as we go through this extremely traumatic period that we’re in.”
John Fredriksen, the world’s richest ship owner, said in interviews with Bloomberg Markets magazine and Bloomberg News this year the industry may be close to a bottom. He is investing $4 billion in vessels to transport liquefied natural gas, gasoline, propane and other fuels, as well as $7 billion for 18 oil rigs.
The largest crude-oil tankers are losing $2,480 a day when they ship 2 million-barrel cargoes of Saudi Arabian oil to Japan, the industry’s benchmark route, according to the exchange. They need $10,670 to pay running expenses, a figure that excludes interest costs on debt, according to Moore Stephens International Ltd., a consultant that tracks expenses.


Capesizes, the largest iron-ore carriers, are earning $3,490 a day, according to the exchange. They need $7,400 to cover operating costs, Moore Stephens estimates.
Blackstone, based in New York, bought nine refined-product tankers in August from Leer, Germany-based Hartmann AG for an undisclosed price. It also controls American Petroleum Tankers Parent LLC, whose ships are authorized to transport cargoes along the U.S. coast.
The U.S. restricts shipping in its waterways to American- owned and -flagged ships under the Jones Act, a 92-year-old law.


Apollo bought a stake in Prestige Cruise Holdings Inc. in 2007 and a holding in Norwegian Cruise Line in 2008, according to Melissa Mandel Kvitko, a spokeswoman for the firm at Rubenstein Associates Inc. The New York-based company started Principal Maritime Management LLC in 2010, which operates a fleet of 11 Suezmax oil tankers.
“Very few ships are being ordered now because they can’t get the funding,” Ross said, adding that accelerating demolitions and rising cargo demand will reverse the current slump over “a couple of years.”
The number of private-equity firms considering shipping investments expanded this year, said Peter Shaerf, a managing director at AMA Capital Partners LLC, a New York-based consultant.
“We’ve seen a lot of people dancing around the edge, asking questions and looking at it,” he said.

To contact the reporters on this story: Alaric Nightingale in London at anightingal1@bloomberg.net; Devin Banerjee in New York at dbanerjee2@bloomberg.net

To contact the editor responsible for this story: Stuart Wallace at swallace6@bloomberg.net