Venezuela to Cut Six Zeroes Off Bolivar to Simplify Transactions 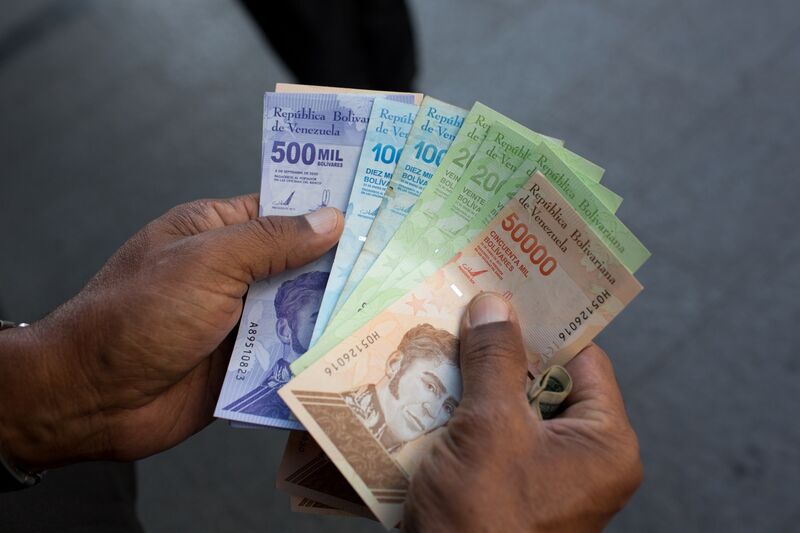 Venezuela is preparing to once again lop off zeroes from the national currency in an attempt to simplify daily transactions which sometimes barely fit on a calculator or require swiping cards multiple times to complete a purchase.

The central bank is planning to slash six zeroes from the bolivar as early as August after previous attempts to issue larger-denomination bills failed to resolve problems created by endemic inflation, according to three people with direct knowledge of the matter who aren’t authorized to speak publicly about the plans.

Venezuela last carried out a “redenomination” of the bolivar in 2018 and in March began printing a 1 million-bolivar note, the largest in the country’s history. But that bill is now worth just $0.32 and isn’t enough to buy a cup of coffee. Since 2008, the government -- first under the late Hugo Chavez, and then under current President Nicolas Maduro -- has removed 8 zeroes from the currency, as hyperinflation decimated people’s savings.

While the country has now informally adopted the U.S. dollar for many every day transactions, most Venezuelans only earn bolivars and the local currency is needed for things like bus fare, parking and tips.

With electronic payments on the rise in Venezuela, the central bank shouldn’t have to print as many of the new bills as in previous “redenominations,” the people said. The bank will likely roll out six different denominations ranging from 2 to 100 bolivars, they said. The name would remain “bolivar soberano.”

The push for simplifying bolivar transactions has come largely from companies who have raised the issue with the government. Things like paying taxes and dealing with other accounting calculations have become absurdly complex.

“This has been desperately awaited by businesses due to the serious operational consequences that come from the overflow of digits in the system,” said economist Tamara Herrera, head of consulting firm Sintesis Financiera.

The central bank didn’t respond to several requests for comment while the government declined to comment on the matter.

While previous attempts to relaunch the currency by cutting off zeroes and printing new bills have failed shortly after implementation, a series of recent reforms that have slowed consumer price gains may mean it has a better chance of sticking now.

Following the second-longest hyperinflation stretch in the country’s history, annual inflation is down to 2,339% a year from more than 300,000% in 2019, according to Bloomberg’s Cafe con Leche index. On a monthly basis, price gains slowed even further to about 20% in May from April. The central bank no longer publishes regular inflation data.

Venezuela’s economy may have hit bottom after seven years of economic contraction during which the currency became virtually worthless amid crashing oil prices and unchecked state spending. Under pressure by U.S. sanctions, the government was forced to scrap some price controls, reduce subsidies on goods including gasoline and remove many restrictions on foreign exchange which may allow the economy to grow this year.

“Everyone has been affected by the huge lag in providing cash for the country,” Herrera said. “Without a real economic stabilization program, we will need another redenomination in a few years.”

— With assistance by Fabiola Zerpa, and Nicolle Yapur