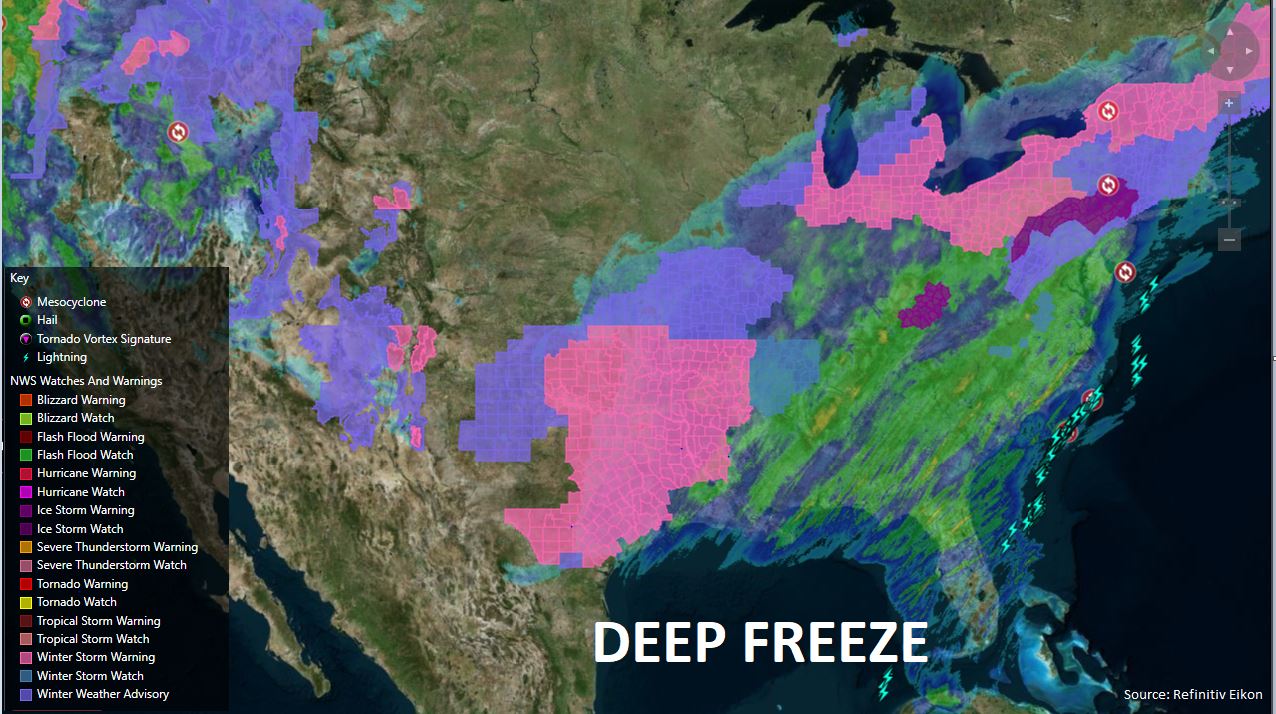 HOUSTON (Reuters) - A deep freeze that hit Texas over the weekend wrought more havoc on the U.S. energy sector on Tuesday, curbing output in the largest U.S. oil field, knocking out a fifth of the nation’s refining capacity, and shutting a key shipping channel in Houston.

Historic cold has knocked out roughly 4 million barrels per day of refining capacity, more than one-fifth of national capacity, according to Reuters calculations. About 500,000 to 1.2 million bpd of crude production has also been affected, and it could be weeks before it is fully restored, industry analysts said.

Around 5.3 million customers were without power nationwide due to winter storms. Texas was hardest hit with around 4.4 million customers affected, according to local power companies, as the state’s electrical grid operates largely independent of other states and therefore cannot draw power from nearby operators.

“The entire Texas system from the wellhead to the electric meter on a home is more designed to deal with multiple 100 degree days than multiple single-digit days,” said Todd Staples, president of the Texas Oil & Gas Association.

Many refiners, including the biggest in the United States, have shut down due to the freeze. Around 4 mln bpd, or 21% percent of U.S. refining capacity, is shut, the biggest weather-related hit since Hurricane Harvey rumbled through the Gulf in 2017.

“We’re talking about a major portion of the U.S. Gulf Coast refining capacity currently being offline, in all likelihood, above 4,000,000 barrels a day,” said Marc Amons, senior research analyst with Wood Mackenzie.

The cold snap sent U.S. oil prices to near 13-month highs, while front-month gas futures jumped to an over three-month high.

In the spot market, next-day power at the ERCOT North hub jumped to a record high of $1,489.75 per megawatt hour (MWh).

“The vast majority of their equipment will be inoperable once the weather warms up, so while we don’t feel that we’re looking at a hurricane-like scenario,” it would probably take about a couple weeks for the refineries to return to pre-storm operations, Amons said.

The Houston Ship Channel, a 53-mile (85 km) waterway crucial to oil and fuel exports, had opened for some vessel traffic during Tuesday but was expected to shut again due to an impending cold blast in the evening.

Whether they will be able to do so through the night will depend on the weather, Plunkett said. Freezing rain expected with another Arctic front may prevent ground transportation within ports and along docks.

“The biggest obstacle is moving people around as most of the highways and bridges are closed... There are a lot of electricity outages in the area, the whole of Galveston is under a blackout. Even we do not have power, but have backup.”

In the oil patch, access to wells has been cut off by icy roads, while power and cellular services have been lost, Staples said.

Artem Abramov, partner at Rystad Energy, estimated the effect on the Permian, the biggest U.S. oil field in west Texas, at anywhere between 500,000 to 1.2 million bpd over the course of five days, though he said most volumes should be restored very quickly.

Reporting by Swati Verma and Arpan Varghese in Bengaluru and Jennifer Hiller and Erwin Seba in Houston; additional reporting by Diptendu Lahiri in Bengaluru; Editing by Marguerita Choy, Emelia Sithole-Matarise and David Gregorio