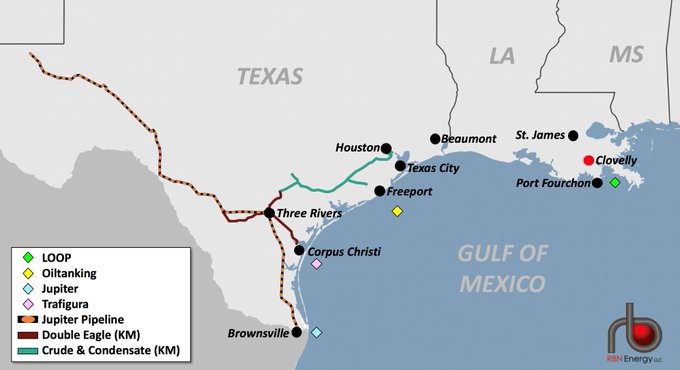 While NuStar’s refined products volumes are almost 100% recovered from 2019 levels as of early 2021, crude demand has been slower to bounce back, especially in the major Corpus Christi location that had emerged as the nation’s top crude-exporting port before the ongoing coronavirus pandemic.

Both the Permian Basin and South Texas’ Eagle Ford Shale are showing signs of strength early this year, Barron said. He noted that NuStar typically moves about 10% of the Permian’s volumes, but that NuStar’s footprint covers about 20% of the Permian’s inventory of drilled-but-uncompleted wells, seemingly giving NuStar an extra advantage in 2021.

Barron said the momentum in January is making him more “cautiously optimistic” for 2021.

“We are starting this year encouraged by the rebound we have seen, and continue to see, across our footprint,” Barron said. “January was promising, and we hope to see that improvement continue.”

The biggest growth area for 2021 should be volumes and exports from Corpus Christi, he said.

Total US crude exports fell from an all-time high of 3.71 million b/d in February down to just 1.83 million b/d for the week that ended Dec. 4, the lowest weekly average since 2018, according to the US Energy Information Administration.

However, exports are back on the rise thus far in 2021. Crude exports rose to 3.48 million b/d for the week ending Jan. 29 and the four-week average jumped to 3.03 million b/d, the EIA said. The question now is whether early 2021 is more of a blip or a sign of a growing trend.

Pre-pandemic, US crude exports were projected to rise to at least 4.5 million b/d by the end of 2021, but S&P Global Platts Analytics has since projected export volumes to dip or stay flat in 2021 and 2022 before rebounding above current volumes in 2023 and growing from there.

As global crude oil demand picks back up, so is the rivalry between Corpus Christi and the Houston Ship Channel for exports, especially with a glut of long-haul Permian pipelines leading to both hubs.

Permian Basin crude production peaked early in 2020 at about 4.8 million b/d before plummeting and, as of February, has rebounded to just over 4.3 million b/d, according to the EIA. At the same time, Permian crude pipeline capacity is already above 6 million b/d after rapid growth in recent years and should exceed 7.5 million b/d once the ExxonMobil-led Wink-to-Webster system is fully online in the third quarter of 2021, according to Platts Analytics.

The 650-mile Wink-to-Webster crude oil pipeline system will trek from the Permian to multiple destinations in the Houston market and connections to Texas City and Beaumont.

However, Barron and NuStar Executive Vice President Danny Oliver said the oil refineries are ramping back up to capacity and that the incremental crude barrels will need to be exported. The argument favoring Corpus Christi is the region has less tanker traffic.